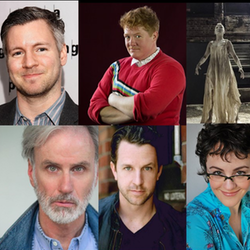 Check out our Guest Artist Showcase

The cast and puppets of Jim Henson's The Dinosaur Train Live!