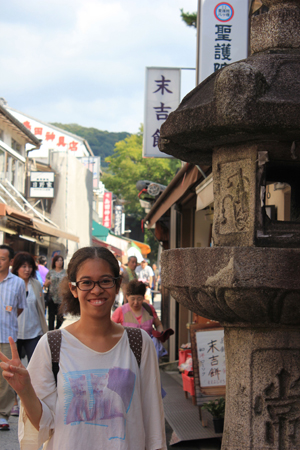 1. What’s it like to live and study abroad?
Living and studying in Japan has been the most rewarding time of my life. Being that I am half Japanese and only visited Japan as a short vacation, I never had a chance to actually study at a university for a long period of time. Living in Japan has helped me learn about my culture in depth both inside and outside of school. Every day I learned something new whether inside the classroom or just walking down the streets of Osaka and talking to different people.

2. What are the classes like?
On top of taking classes for Japanese language, I was also able to take lecture classes taught in English. I took classes that included Cross-Cultural Psychology and Peace, Development, and Democratization: The Asia Challenge. Being that the courses were not offered in SUNY New Paltz, it was a lot of fun taking courses that interested me and at the same time were challenging. However, there was definitely a lot of time to hang outside of the classroom as well, so many students did not miss out on traveling to other places or going to events/activities.

4. What else was enjoyable about your experience? 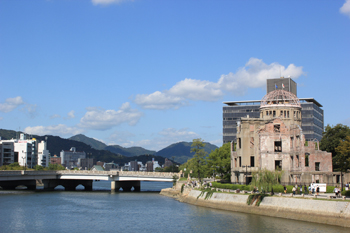 The most enjoyable thing about my experience was traveling around Japan with my new friends. Although I have been to Japan several times with family, I went to many cities I have never been before including Hiroshima, Kobe, and Kyoto. I loved going to different landmarks, my favorite being the Hiroshima Peace Memorial and the Shorenin Temple in Kyoto. I also traveled to Seoul, Korea for the first time, which was also very rewarding. Since I have never been to another Asian country other than Japan, it was fun experiencing another culture as well while studying abroad.

5. What about family and friends back home?
Leaving behind family and friends in my hometown was a bit hard at first, but once school started, I made a lot of friends, so I didn’t feel as lonely. I also kept myself busy all the time with various activities including going to Osaka and shopping. 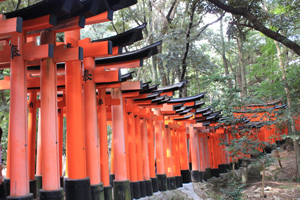 Saying goodbye to my new friends was harder for me. Since I lived in Japan for 6 months, it started to feel like home and I didn't want to leave. Coming back to America was a hard transition because of the reverse cultural shock. I had a hard time readjusting myself back, but after 3 months, I was able to get back on track. There are times when I miss Japan, but I talk to friends I made in Japan to remind myself of the great times I had abroad. I plan on meeting my friends in the future.

7. Any advice for other students? Like financial aid?
Regardless of the student’s financial or academic limitations, I suggest that students should just go abroad! There is nothing to lose and you will gain so much knowledge outside in the world rather than just being in the classroom. Study abroad is actually much cheaper than one expects and it can help not only with your academics, but also your resume. Go with an open mind and experience as much as possible! Use the time you have as much as possible and travel to all the places you want to go to. You will not regret anything!