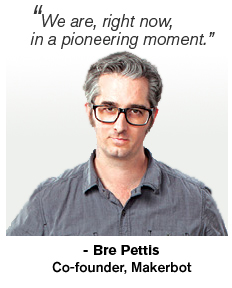 New Paltz celebrated the opening of the nation’s first MakerBot Innovation Center with a press event and ribbon-cutting ceremony on Tuesday, Feb. 11. More than 100 people, including members of the business community, students, faculty and staff, attended the event, which was followed by a lecture by MakerBot CEO Bre Pettis.

Pettis’ eagerness and excitement were palpable as he prepared for the ribbon cutting in the Innovation Center. “We were looking for a partner in New York, because New Yorkers just get stuff done,” he said. “It seemed like such a great opportunity. I’m personally really excited to see what happens when the jewelry students join forces with the mechanical engineering students. I want to invest in the company that emerges from the meetings that happen in this room.”

“In many ways, we’re planting a seed here, in very fertile ground, with a lot of enthusiasm, a lot of excitement, a lot of potential energy,” added Pettis, who was described by New Paltz President Donald P. Christian as “the Steve Jobs of 3D printing.”

The event showcased 30 MakerBot Replicator Desktop 3D Printers and scanners, which were actively printing student projects and demonstrating the ease of using the machines as well as the wide range of objects that can be printed. The Center, which will be used by students, faculty, and local industries, will enable rapid prototyping and increase product design cycles. It will also create a forum for increased collaboration and innovation that will help train the next generation of engineers, industrial designers, and artists. 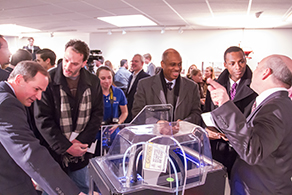 Sean Eldridge, co-founder of the Hudson Valley Advanced Manufacturing Center at SUNY New Paltz and president of Hudson River Ventures, said, “This center is a big win for our region. It will allow more students and small businesses to access this exciting technology, and it will solidify our region’s leading role in using 3D printing technology and training our students and small businesses on its use.”

Eldridge said several local businesses are already utilizing 3D printing in the creation of their products, like custom motorcycles from Orange County Choppers; adaptive equipment for disabled individuals from Ulster County-based Rifton; and renewable energy products from Uncharted Play in Poughkeepsie. “There’s no question that 3D printing technology is changing manufacturing forever, and so we must adapt, and we must take advantage of the new possibilities that it offers us,” he said.

President and CEO of Hudson Valley Economic Development Corporation (HVEDC) Laurence Gottlieb, whose daughter is a first-year student at New Paltz, said the HVEDC “takes tremendous pride” in knowing that the 3D printing initiative has “started something quite spectacular here at SUNY New Paltz, and by extension, the entire Hudson Valley.” He also remarked, “We are incredibly proud to be part of this, because what we’ve started is pure magic, and exactly the essence of what good economic development is all about.” 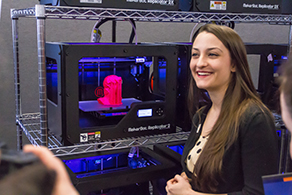 Katherine Wilson ’14 (Metals), a graduate student and assistant in the Innovation Center, commented on the opportunities the Center will provide for New Paltz students. “The lab’s most recent addition of MakerBot 3D printers and digitizer 3D scanners is going to make a great impact on the way students learn to use 3D technology,” Wilson said. “With the MakerBot array, students will be able to print their pieces rapidly and gain an understanding of how the printers work. The knowledge that can be acquired from interacting [with] and operating the printers directly, rather than through a third-party manufacturer, is extremely advantageous.”

Paige Munroe ’15 (Metals), a technician assistant in the Innovation Center, said the most frequent question she found herself answering during Tuesday’s event, especially from students, was: “How and when can we start using these?”

The answer is now. “All the students on campus can come in and download a file and print it right away,” said Munroe, who also noted the unbeatable price of printing an object – 5 cents per gram plus a $1 processing fee – which makes the technology even more accessible for traditionally cash-strapped college students. “It’s super cost-effective. It will be really useful for the community outside of just New Paltz, too. Thirty MakerBots is pretty impressive.”

Dean of the School of Science & Engineering Dan Freedman and Interim Dean of the School of Fine & Performing Arts Paul Kassel spoke about how curriculum in both schools will grow to encompass this new technology, and the many opportunities for collaboration that will be made possible by the Center. Central Hudson’s Vice President of Public Relations Denise VanBuren and Vice President of Business Development & Governmental Affairs Anthony Campagiorni were recognized for the key role that Central Hudson has played in New Paltz’s 3D printing initiative and commented on the potential economic impact of this undertaking throughout the region.

“This is the next big step in the development of the College as the leading hub for advanced manufacturing technology in the Hudson Valley region and New York State and I cannot wait to learn what comes next,” said SUNY Chancellor Nancy Zimpher in congratulatory remarks via pre-recorded video.

In his talk, titled “Leading the Next Industrial Revolution,” Pettis discussed MakerBot’s development and the company’s commitment to innovation. Speaking to a standing-room only crowd in Lecture Center 102,  made up primarily of students, he talked about the importance of getting outside of one’s comfort zone and trying new things. He sees great potential in the creative ways that students will come to utilize the machines. Pettis is considered the foremost leader in making 3D printing available to educators and consumers.

This partnership between New Paltz and MakerBot is the next chapter in the success story of New Paltz’s already-established 3D printing initiative. The Hudson Valley Advanced Manufacturing Center at SUNY New Paltz was launched in May 2013 with private financial support from Eldridge and Central Hudson. In August 2013, SUNY New Paltz launched its unique certificate program in Digital Design and Fabrication. In December 2013, the Mid-Hudson Regional Economic Development Council and Governor Andrew Cuomo awarded the initiative $1M in state economic development funds.