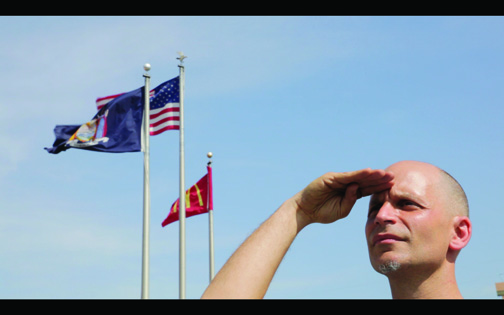 Over the past two years, artist Tim Davis has made this series of videos, sculptures, and prints as a way to explore and express his deep curiosity about (and his intimate familiarity with) hard work, creativity, routine, humor, and risk. The Upstate New York Olympics project allows the artist – and the viewer – to look at and think about what this region looks like now. The project also offers connections between the traditions and modes of photog- raphy, landscape, performance, and installation art. It also connects individual concerns – aging, for example – to broader discussions about personal and global issues. 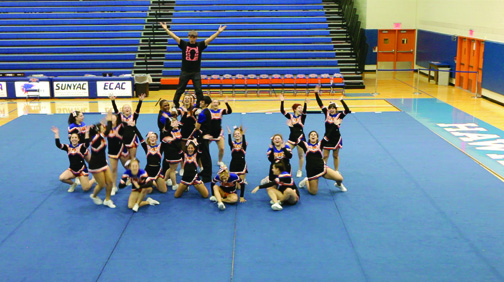 Videos
The Upstate New York Olympics videos on the four large television moni- tors are an introduction to Davis’s subjects and strategies. His version of an Olympics opening ceremony includes the American flag, the New York State flag, and a flag bearing the McDonald’s logo. Here the artist is celebrating, and mocking (but, also, honoring), the personal and universal struggles so often used to promote Olympics. His sports graphics combine a nostalgia for past glory days of televised Olympic coverage with a melancholy acknowl- edgement that the stories and the individuals brought to us by the networks were never really as purely evil – or as good – as they were supposed to be. The videos emphasizing sound serve to highlight the presence of the natural world in all the works and emphasize the artificial nature of the video me- dium: the events all involve objects hitting surfaces in an odd metonym for an attention-getting rap on the glass of a television monitor. And his cheerlead-
ers – New Paltz’s own! – exemplify the exuberant pointlessness of all artistic or sporting endeavors. Beauty is simply fundamental to our efforts to both understand and to unreflectively enjoy our lives.
The video events that make up Davis’s Upstate New York Olympics are all shown together in a large video projection loop. They are also shown, in a slightly different order, on a flat-panel screen. Viewers can, at their own pace, watch the artist test himself against his world and also watch as he makes an oddly complete and compelling portrait of himself and that world. The artist and his world are, by turns, fragile, tough, graceful, and surprising. They are, alternately, thrillingly sublime and then frustratingly dingy and even pathetic. And yet, Davis keeps looking for fresh challenges, the world keeps supplying them, and we keep watching. 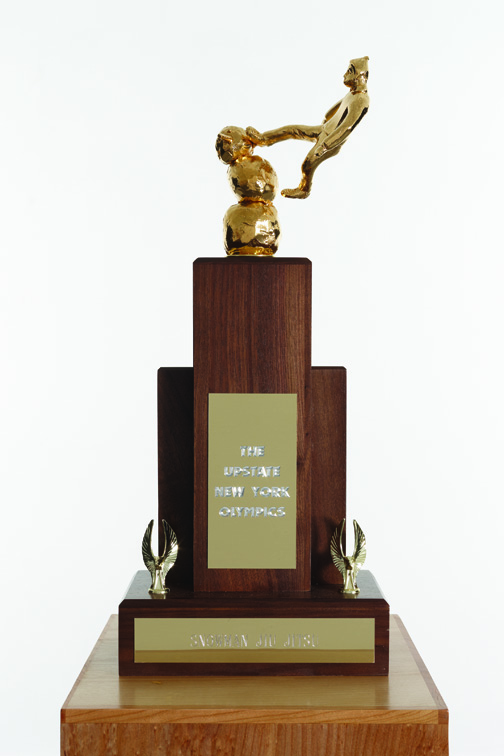 Digital Prints and Trophies
The digital collages in the exhibition – composites of ancient imagery and recent video stills – represent Davis’s visual investigations of the connections between body, competitor, decoration, and documentation. The trophies are humble but aspirational versions of club-level awards lent a strange grav-
ity by their hand-crafted appearance and event-specific subject matter. The trophies also embody Davis’s drive to combine iconography and themes from fundamentally different sources in a manner that provokes the viewer to think anew about all the references the artist has pulled together – the noble mate- rial bronze, the age-old goal of victory, and a guy sliding across the hood of a junked car? Because of their focus on their work, artists and athletes often connect things that the rest of us can struggle to reconcile: utter solitude and intense engagement, ferocious discipline and irresponsible-seeming freedom, and respect for the masters and a drive to exceed all past accomplishments.

Support for the exhibition catalogue was provided by the New York Council for the Humanities.