Curated by art faculty and students

At the end of each semester, students graduating with Bachelor of Fine Arts or Master of Fine Arts degrees exhibit art work created as part of their thesis projects in the museum's west wing. Exhibitions are designed and installed by the students, under the supervision of the Curator of Exhibitions and the museum Preparator. 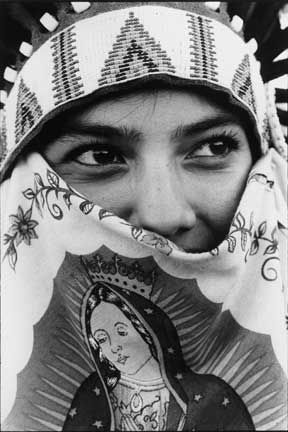 Miguel Gandert, an internationally-acclaimed photographer and professor at the University of New Mexico has participated in and documented the rituals of the indigenous, mestizo, Nuevo Mexicano culture for more than twenty years. This event is part of The Big Read, an initiative of the National Endowment for the Arts in partnership with the Institute of Museum and Library Services and Arts Midwest. 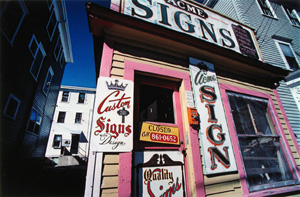 Curated by the Dorsky Museum staff

Selected works from the SDMA's collection with special emphasis on works not recently exhibited at the museum, including works of photography, world collection, etching, and Chinese prints.

A portfolio of black-and-white photographs, inspired by Film Noir and pulp fiction, taken at night in Los Angeles and New York City. Helen K. Garber’s Urban Noir series, includes both the intimate views made at street level and the exhilarating, expansive rooftop panoramas, distinguishing themselves from other nightscapes. Garber’s principal inspiration for this series, represented in this exhibition by work made in Los Angeles and New York, began with her infatuation with these old films.

A Designed Life: The Arts and Crafts of Byrdcliffe

This exhibition features a representative selection of paintings, prints, dawings, photographs, ceramics, and furniture, created by artists associated with the historic Byrdcliffe Arts and Crafts Colony (founded in 1903). It celebrated the newly developed collection-sharing partnership between the Woodstock Byrdcliffe Guild (WBG) and the Dorsky Museum. The WBG is steward of Byrdcliffe, possibly the oldest continuously operating arts and crafts colony in the nation.

The environment, landscape, and buildings of the Byrdcliffe Arts and Crafts Colony are the inspiration for this exhibition jointly organized by the Dorsky and the Center for Photography at Woodstock. These recent works were created by Artist-in-Residence Fellows from CPW: Kira Lynn Harris, Isabelle Lumpkin, Stephen Marc, Xaviera Simmons, Karina Aguilera Skvirsy, and Kwabena Slaughter. 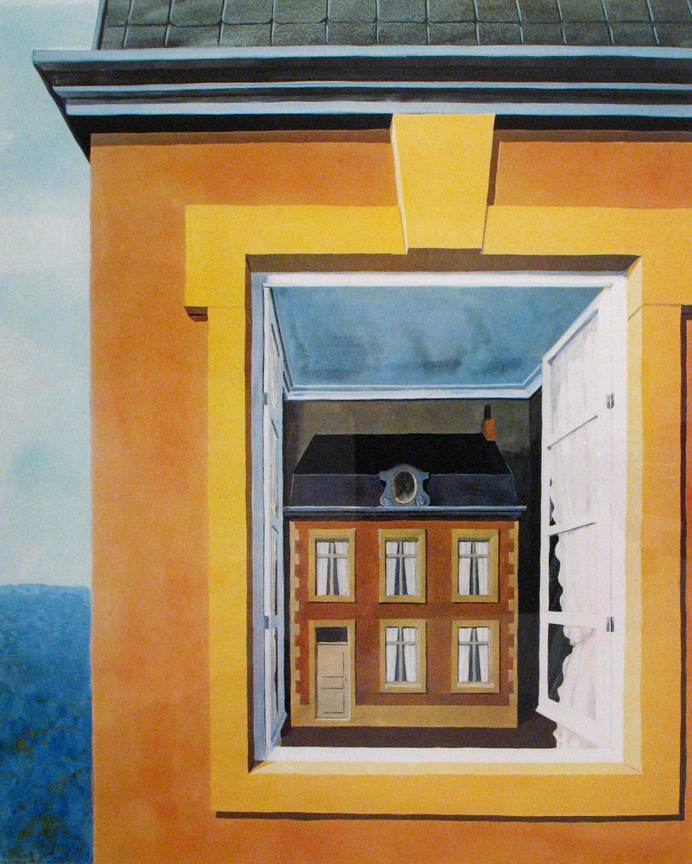 George Quasha: “art is” and Axial works in stone, graphite, and video

Three interrelated projects in the Axial series included an installation of precariously balanced stones, a selection of small and large graphite drawings, and a suite of video pieces. They shared the gallery with art is, an ongoing video project consisting of short interviews with over 500 artists who offer revealing commentary on the elusive question, "what is art." Quasha is an artist/poet who resides in Barrytown, New York. He is a 2006 Guggenheim Fellow.

Charles Rosen was one of the most accomplished Pennsylvania Impressionists, and later, a prominent Modernist associated with the Woodstock Art Colony. In the early 1900s Rosen became a successful landscape painter but, dissatisfied with this style, eventually abandoned the purely representational mode in favor of a rhythmic and semi-abstract style that incorporated elements of the built landscape, decorative patterning, and cubist fractured perspectives. Rosen maintained that this mature style was based on a passionate exploration of form as a living, organic phenomenon, what he referred to as the form that radiates life.

This exhibition features 50 works, including major paintings and works on paper spanning Rosen's stylistic development. The works in the exhibition are drawn from the collections of the James A. Michener Art Museum, as well as from other public institutions and private collections in Connecticut, Ohio, New York, Pennsylvania, Missouri, and Washington, DC, and was organized by the James A. Michener Art Museum, Doylestown, Pennsylvania.

Sculptor, printmaker, installation artist, and set designer Judy Pfaff will be the subject of the next Hudson Valley Masters series exhibition at the SDMA. Pfaff exuberantly investigates the visual and metaphorical intensities of the natural and built worlds. Her deep engagement with materials and processes has resulted in the creation of a respected but always surprising body of subtle, powerful work.

Pfaff's large prints incorporate multiple plates, collaged papers and an array of other materials and techniques; these works are presented in elaborate frames designed and fabricated to Pfaff's specifications. The exhibition focuses on prints created at Tandem Press in Madison, Wisconsin, and on prints and drawings the artist has completed since receiving a MacArthur Fellowship in 2004.

In addition to the prints and drawings, the SDMA will present a new project by the artist: a group of works from the museum's permanent collection selected and installed under the direction of the artist. 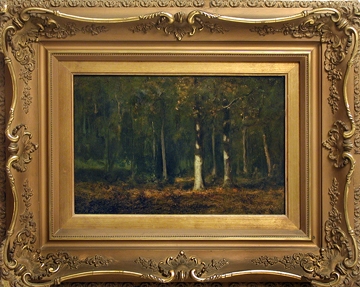 Museum, Mission and Meaning: Selections from the Collections

This installation marks the first in a series of long-term installations in three of the SDMA’s spectacular east wing galleries, dedicated to displaying work from its diverse collections. A museum’s value is determined, to a large extent, by the uniqueness of the objects it holds in trust, and how it interprets and uses the contents of its collections. The works on display here are designed to demonstrate the growth and development of collections at the SDMA, and to underscore the areas of focus and strength that are particular to the museum.

Morgan Anderson Gallery: A survey of 19th and 20th century American prints, drawings, paintings, and sculpture selected from the permanent collection. The SDMA has a special commitment to collecting important works of art created by artists whose careers are linked to the Hudson Valley and Catskill regions. Works from the permanent collection on display in the Morgan Anderson Gallery include works by George Inness, Milton Avery, George Bellows, Bolton Coit Brown, Ilya Bolotowsky, Doris Lee, Lilly Ente, Eugene Speicher, Charles Rosen, Austin Mecklem, Theodore Roszak, Richard Segalman, and Don Nice. Many of the artists featured in this gallery were associated with the historic Woodstock Art Colony.

Howard Greenberg Family Gallery: First dedicated in 2005, this gallery focuses on the SDMA’s extensive photography holdings, which include both the museum’s own permanent collection and the collection of the Center for Photography at Woodstock, housed at the SDMA. Works on view include major recent acquisitions, including two rare issues of Alfred Stieglitz’s magazine Camera Work. The collections span photography, from 19th century images of the Adirondacks by Seneca Ray Stoddard and pictorialist portraits by Eva Watson-Schütze, to work by renowned mid-20th century photographers such as Aaron Siskind, Edward Steichen, Josef Sudek, Sid Grossman, and Weegee, to significant bodies of work by more contemporary figures like Larry Fink, Mark Goodman, Joel Meyerowitz, and Allen Ginsberg.

Corridor Gallery: the SDMA’s permanent collection spans a period of almost 4,000 years, and includes art and artifacts from Africa, Asia, Oceania, and the Americas. On view in the Corridor Gallery will be outstanding examples from the museum’s rarely seen world study collection, including Chinese and Japanese woodblock prints, Australian bark paintings, and pre-Colombian art and artifacts. Made newly accessible through this installation, this broad group of works serves to complement museum’s other holdings, and to support the teaching mission of the college.

Daniel Morel, Injured and panicked students and professors shout for help after they were attacked by pro-Aristide thugs who attacked their march at State University, December 5, 2003, courtesy the artist and Wozo Productions

A photo exhibition and series of conversations based on the photographs of Daniel Morel. This book and exhibition are dedicated to the memory of everyone who has fallen while doing what they thought would help take the country one step forward, especially Young Haiti, Yves Volel, Father Ti Jean Pierre-Louis, the Izmery brothers, and all of the victims of the Ruelle Vaillant (November 29, 1987) and St. Jean Bosco (September 11, 1988) massacres. 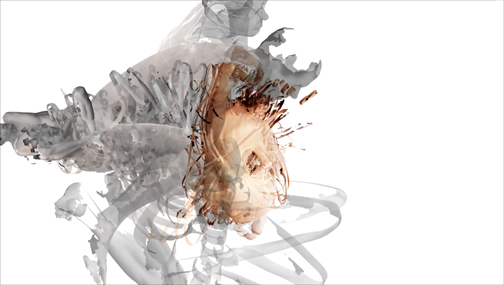 [un]moving pictures encompasses recent and new works by LoCurto and Outcault in media as disparate as site-specific installations, digital animations, animation/object hybrids, and large-scale color prints. Clearly a product of the contemporary technological environment, these works nevertheless contain, I think—along with the telling connections Patricia Phillips makes in her “Corporeal Calculations” essay to Muybridge, Picasso, Braque, and Duchamp—that the viewer might link back to other past visual regimes. Back to the proto-cinematic visual language of the Baroque—a consistently dynamic point of view constantly and rhythmically surveying the body in space. Back to the ever-more-rational—but somehow lingeringly eccentric—mechanisms and expressions of the gilded age of capital and industry. And back, perhaps, to a certain subset of modernism—the new-world pastoral materialism of Sheeler and others—that surveyed the strengths and weaknesses of the modern condition by deploying expression, precision, and elision; and by invoking obscurity, tension, and clarity.

In this new series of photographs made near Wides’ woodland home in the Catskills, she focuses on the grandeur of the landscape that captivated the Hudson River School of painters.

It was Thomas Cole’s view that it was all right, even necessary to falsify observed nature in the name of some higher truth. As it was for the Hudson River painters, transformation is a potent force in these photographs. Wides transforms ordinary reality into majestic scenery. A truck dump near Cole’s house is rendered as something like a botanical garden of refuse, as certain objects and details loom into consciousness with heightened clarity while the rest fade away into dreamy abstraction. The boundaries between fact and fiction, recollection and preservation are blurred. Picking up a thread common to all of Wides’ work, this series explores the play between the exterior world and the subjective one.

The photographs of Susan Wides have been featured in numerous exhibitions in the US and Europe. Her work has appeared in the anthologies One Man’s Eye and Here is New York. She has contributed to several magazines, including Harpers, Double Take, Architecture and 2wice. Her work is in the permanent collection of the Norton Museum of Art, International Center of Photography, The Art Museum of Princeton University, Brooklyn Museum, Bibliotheque Nationale and the Center for Creative Photography.

Anxious Objects is a challenging exhibition which explores the range of possibilities in contemporary craft and embodies the impressive talents of artists who live in the mid Hudson counties of Ulster, Dutchess, Orange, and Columbia. It features work in various craft media by emerging and mid-career artists who embrace seemingly contrary tendencies in their work—both aesthetically and technically.

View a slideshow of works in the exhibition.

What does the word "nature" mean in the 21st century? In the context of contemporary, technology-driven, post-industrial culture, our relationship to nature has become vexed, as the boundaries between the natural and the artificial have become more and more blurred. The work in this exhibition represents a range of artistic responses by members of the SUNY New Paltz art faculty on this theme, including painting, drawing, sculpture, photography, ceramics, printmaking, new media and installation. The diversity of these media reflect the varied approaches taken by these faculty members as they address issues of place, the environment, and our response(s) to them, as we begin to appreciate what has been lost, what has been gained, and how we will continue to shape our relationship to 'nature'—whatever we decide that means—in the future.