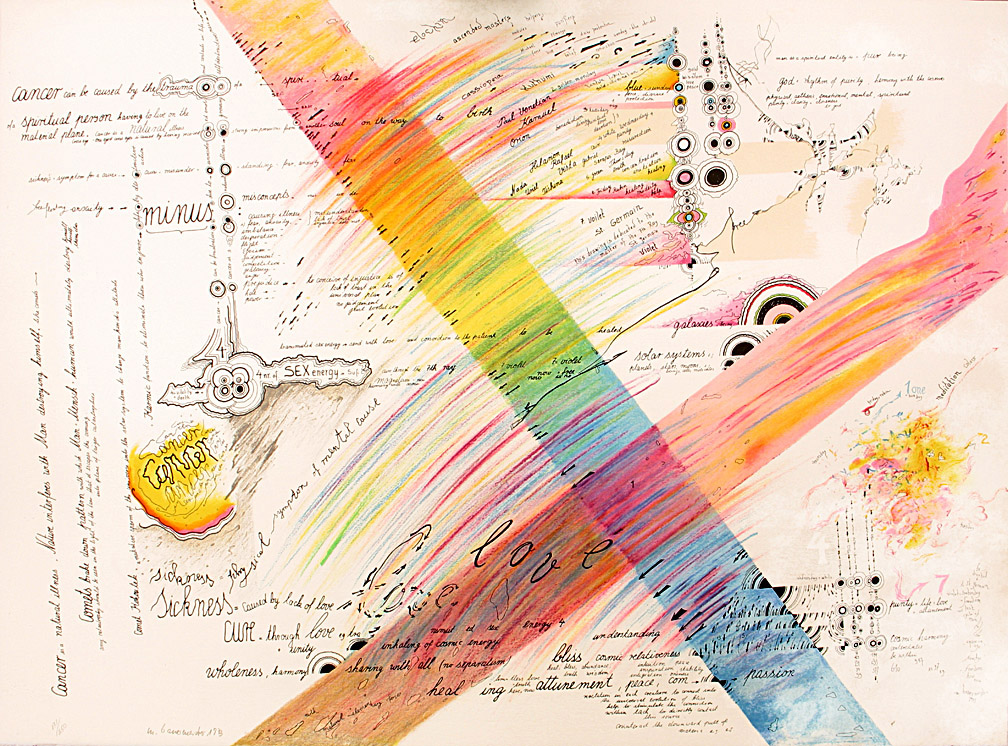 German-born artist Mary Bauermeister (b.1934) produces work in various mediums, from drawings and sculptures to performance and music. She was active in the Fluxus movement along with other prominent avant-garde artists such as Christo. Rooted in music and echoing Dadaism, Fluxus artists started as a small international network who shared similar beliefs; it was an attitude rather than a movement, and collaborations between artists and mediums were encouraged.

While studying the fringe sciences the 1970s, Bauermeister created Rainbow (1973), a lithograph in the Dorsky collection. She uses a creamy white background as the base. Two intersecting diagonal bands of color transcend across the page, and black cursive lettering dances over the surface serving as a mind map of interweaving ideas. Through the central band, Bauermeister shifts through the color spectrum; she begins with red and finishes with violet. Inspired by music, she uses strokes of color that are rhythmically smeared across the lithograph.

The surface lettering, a kind of visual poetry, explores her interest in human emotion and science. The viewer can see Bauermeister’s thoughts as they flow into one another through the use of words such as bliss, love, and healing. Bauermeister also includes a repetition of words such as cancer, sickness, and cure. The word cancer emerges from a cell-like shape. A careful study of the words shows that they may seem dark in nature; however, she juxtaposes these words against the cheerful title and colors. Perhaps the rainbow symbolizes a new hope, an inspiration for an optimistic future.

See more selections from our collection