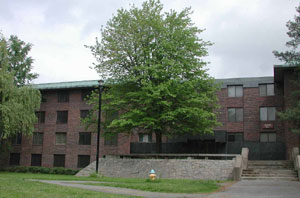 In the basement of Shawangunk Hall are a laundry room with washers and dryers, a computer lab, a TV lounge with a ping pong table, a bike rack, a recycling room, and cooking facilities. Located on the first floor are vending machines, a microwave oven, public restrooms and a study lounge.

Shawangunk Hall is named for the iconic Shawangunk Ridge overlooking the Village of New Paltz, which is visible from multiple points on campus. Pronounced “sha-WAN-gunk,” the word is translated in the Brinton Lenape-English Dictionary (Unami dialect) as “southward.”

From 1968-2019, the building was named Lefevre Hall after Andries and Simon LeFevre, original patentees of New Paltz who settled in this region along with other original Huguenot patentees during the 17th century.

Early generations of the LeFevre family owned enslaved Africans prior to the 1828 emancipation in New York State. During the Civil War, many LeFevre family members fought with the Union Army, including Johannes LeFevre, who rose to the rank of Captain in the 156th regiment of the New York Volunteer Army before his death at the Battle of Cedar Creek.

Subsequent generations of the LeFevre family demonstrated strong commitment to education and contributed to founding, governing and supporting the schools that would eventually become SUNY New Paltz.