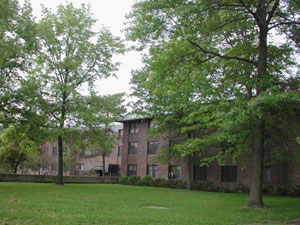 In the basement of Mohonk Hall are a computer lab, laundry room with washers and dryers that are free to use for all residents, a TV lounge, cooking facilities, a bike rack and a recycling/trash room. Located on the first floor of Mohonk Hall are vending machines, a microwave oven, public restrooms and a study lounge with two computers.

Mohonk Hall is in close proximity to campus tennis and basketball courts, the Student Health Center, Peregrine Dining Hall and computer lab, the Student Union Building and Elting Gymnasium. Mohonk Hall offers its diverse residents a dynamic and high-energy environment, a friendly atmosphere that feels like home away from home, and many opportunities to get involved within the hall and campus communities.

As a 10-month hall, Mohonk is open during all scheduled vacations (unless otherwise indicated by the Director of Residence Life), allowing its resident students to remain on campus when other halls are closed. Students must already live in 10-month housing to stay over breaks.

Mohonk Hall is named for Lake Mohonk, one of the “sky lakes” on the Shawangunk Ridge overlooking New Paltz. On the coast of Lake Mohonk sits Mohonk Mountain House, a 150-year-old resort owned and operated by the Smiley Family, with which SUNY New Paltz enjoys a strong and long-standing relationship.

The word “Mohonk” is believed to derive from the Delaware Indian word “Mogonck,” which was used for centuries to refer to the high hills overlooking present-day New Paltz.

From 1968-2019, the building was named DuBois Hall after Louis DuBois, an original patentee of New Paltz who settled in this region along with other original Huguenot patentees during the 17th century.

Early generations of the DuBois family, including Louis DuBois, owned enslaved Africans prior to the 1828 emancipation in New York State. W.E.B. Dubois, the American author, civil rights activist and founding director of the NAACP, traced his own lineage back to Louis DuBois.

Subsequent generations of the DuBois family demonstrated strong commitment to education and contributed to founding, governing and supporting the schools that would eventually become SUNY New Paltz.