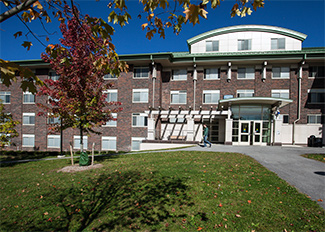 In the basement of Ashokan Hall are a laundry room with washers and dryers that are free to use for all residents, a TV lounge, a bike storage room, a recycling room, a study lounge, computer lounge, and a kitchen equipped with an oven, stove top, and microwave. Located on the first floor are vending machines, student mailboxes, and public restrooms.

Ashokan Hall is in close proximity to a campus computer lab, Peregrine Dining Hall, and the Student Union Building. Ashokan Hall seeks to provide its diverse students with academic, cultural, educational and social programs to enhance living and learning experiences outside of the classroom.

As a 10-month hall, Ashokan is open during all scheduled vacations (unless otherwise indicated by the Director of Residence Life) to permit students needing housing to remain on campus when other halls are closed. Students must already live in 10-month housing to stay over breaks.

Ashokan Hall shares a name with the Ashokan Center, a conference and retreat center in the Catskill Mountains, which was formerly part of SUNY New Paltz then known as the Ashokan Field Campus.

Ashokan is also the name of the nearby reservoir, a major water supply for New York City and the Village of New Paltz. The word “Ashokan” is believed to derive from an Iroquois word and is often translated as “place of many fishes.”

From 1968-2019, the building was named Crispell Hall after Antoine Crispell, an original patentee of New Paltz who settled in this region along with other original Huguenot patentees during the 17th century.

Early generations of the Crispell family, including Antoine Crispell, owned enslaved Africans prior to the 1828 emancipation in New York State. During the Civil War, many Crispell family members fought with the Union Army, including Abraham Eltinge Crispell, who served as Brigade Surgeon of Volunteers beginning in 1862.

Subsequent generations of the Crispell family demonstrated strong commitment to education and contributed to founding, governing and supporting the schools that would eventually become SUNY New Paltz.