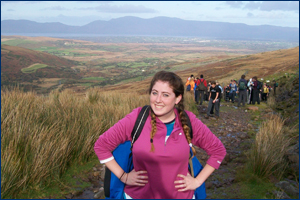 **A note to all: where there’s a will there’s a way. Studying Abroad is without a doubt the best thing that has EVER happened to me and I encourage everyone to partake in this life changing adventure. The experience is indescribable. DO IT!

1) What’s it like to live and study in a foreign country?
It is absolutely amazing. It was a life altering experience that I will treasure for the rest of my days. It was a trip filled with fun, obstacles, self discovery and adventure. I studied at the University of Limerick in Limerick, Ireland. I am of Irish heritage so living in Ireland was really special. It is still hard for me to believe that for four months, Ireland was home. And it certainly became home very quickly. I learned the differences between the United States and Europe and found a new appreciation for other cultures as well as for America.

2) What are classes like?
Classes at UL were much more laid back than they are at New Paltz. I attended an hour lecture for each class once a week. I also had to attend one thirty minute tutorial a week for each class as well. During the lecture the professor would just teach, usually through a Power Point presentation. There was hardly any interaction with the class. The tutorial was more of an open discussion of the material. I was not required to purchase any books. There was hardly any out of classroom work. The only work I had was four papers and four finals [which consisted solely of in-class papers]. The course load was definitely more lax than in America.

3) What is it like getting to know people from a different culture?
It was really exciting getting to meet all sorts of new people. I lived in a house for eight people. I was the only American! I lived with two French girls, two Irish girls and three Irish boys. Luckily the upstairs was mostly girls and the downstairs was mostly boys. It was fascinating to learn about the interests and hobbies of Irish [and French] young people in comparison to American college-aged students. I became the best of friends with the two Irish girls. We spent the majority of our time together. We all spent a lot of time in the kitchen and TV room just hanging out. I also met a lot of other Irish and American students. The Irish were SO welcoming and friendly; you could just meet and they’ll act like they’ve known you for years. Automatic friends. I loved it! 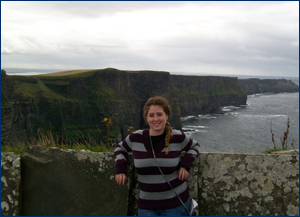 4)What else was enjoyable about your experience?
There was nothing I did while I was abroad that I did not thoroughly enjoy. I joined two clubs while I was at UL. One was the International Society; it held programs and trips around the country to all the international students [Irish students were allowed to join as well]. I also joined the Outdoor Pursuits Club. The OPC planned hiking and ‘hill climbing’ trips that brought me all over Ireland. I climbed the third highest AND highest mountain in Ireland! On top of exploring the Emerald Isle, I traveled to several other countries. I traveled with two American girls I met: Kaitlin, from Chicago, and Katherine, from upstate New York. Together we went to France, England, Wales, and Scotland. While we were in Wales, we climbed the highest mountain in Wales/England! The girls also joined the International Society and the OPC with me. I saw more of the world in four months than I probably will in my entire life.

5) What about family and friends back home?
It was really hard saying goodbye to everyone and everything at home. But the tears at the goodbyes were worth the amazing time that followed. I Skyped with my mother and sister usually once every two weeks; I also Skyped with the EOP staff a few times as well as my suite-mates. Every country I went to I bought a postcard and sent it to my suite-mates. They hung them on the wall in our common area. In today’s day and age, it was really simple to stay in touch with everyone back home. I was never really homesick, which was good, but I knew that if I was it was not difficult to touch base with home.

6) Saying goodbyes and returning home?
Saying goodbye to the friends I made while in Ireland was extremely difficult; probably one of the hardest things I’ve done in my life. I spent so much time with the two American girls I met and Irish housemates that going from seeing them every day to not any more was INCREDIBLY hard. We spent as much time together as we could prior to our flights. We exchanged emails, skype names and American cell phone numbers. Saying goodbye to my housemates was also hard, even the Irish boys were upset with my leaving! My Irish housemate Kate and I stayed up all night the night before I left for the air port. I adored what my life had become in Europe and it was very hard to leave. I cried in August saying I did not want to go and I cried in December because I did not want to leave.