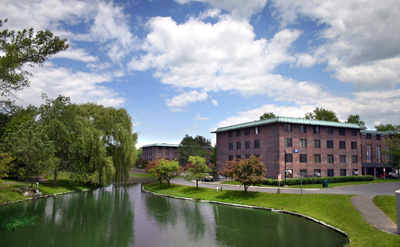 In the basement of Awosting Hall are a computer lab, laundry room with washers and dryers that are free to use for all residents, a TV lounge, cooking facilities, and a recycling/trash room.

Also located in the basement is OASIS, a student run crisis center, and HAVEN, a rape crisis center, both of which are affiliated with the campus Psychological Counseling Center. Vending machines, a microwave oven, public restrooms and a large study lounge are on the first floor of Awosting Hall.

Awosting Hall is in close proximity to the outdoor basketball court, the Student Health Center, Peregrine Dining Hall and a computer lab. Awosting Hall residents are active within their diverse community and have established a friendly atmosphere throughout the building.

As a 10-month hall, Awosting is open during winter and spring breaks, allowing residents to remain on campus when other halls are closed. Students must already live in 10-month housing to stay over breaks.

Awosting Hall is named after Lake Awosting, one of the “sky lakes” on the Shawangunk Ridge overlooking New Paltz. The word “Awosting” is adapted from the Native American (Munsee) word “aiaskawosting,” which referred to a region to the west of present-day New Paltz that was characterized by high, grassy hills.

From 1968-2019, the building was named Deyo Hall after Christian and Pierre Deyo, original patentees of New Paltz who settled in this region along with other original Huguenot patentees during the 17th century.

Early generations of the Deyo family, including Christian and Pierre Deyo, owned enslaved Africans prior to the 1828 emancipation in New York State. During the Civil War, many Deyo family members fought with the Union Army, including Andrew LeFevre Deyo, who was deployed to Louisiana during his service.

Subsequent generations of the Deyo family demonstrated strong commitment to education and contributed to founding, governing and supporting the schools that would eventually become SUNY New Paltz

Click here to read more about the building renaming process.

Contact RD Sabi via email at khans6@newpaltz.edu if these hours are not convenient for your schedule.

For changes to office hours due to emergencies and unforeseen circumstances, please see updates outside RD Office door in Awosting Hall.