Tanya Wilson is a graduate of SUNY New Paltz and EOP Alumnus with a degree in Business Management.  She studied abroad at the University of the Virgin Islands in St. Thomas during her junior year.  When asked about her experience she replied, "I encourage all students to go away if they get the opportunity. There is so much to explore in the world that you have to go take chances. You may be missing out on the chance of a lifetime. I am extremely glad I decided to go and study abroad. And now I plan to travel around the world."

Q: WHATS IT LIKE TO LIVE AND STUDY IN A FOREIGN COUNTRY? 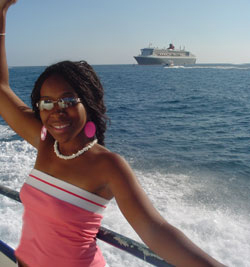 A: During the Spring Semester of 2005 I went to study abroad at the University of the Virgin Islands in St. Thomas. This was my first trip out of the country and it was one that I will cherish for the rest of my life. I went to the island with little information about the residents who lived there or their culture. When I arrived on the island I met two other girls that were also from SUNY New Paltz. It was very ironic how we all lived in the same residence hall at New Paltz but did not know one another.

The first thing I noticed about the island was the water. I have never seen such beautiful clear water. It was so amazing watching the scenic views from the airplane. I thought I was going to be skeptical or nervous about going some place where I did not know anyone, let alone live in the country for four months, but I was not nervous one bit. I was so excited that I would be getting the chance to interact and network with different people. Of course, I knew I was going to miss my family but I did not let that hold me back from what I was about to experience. I remember meeting my Residence Advisor and my roommate for the first time. They were extremely nice and courteous. I remember the rooms being huge and the suites looked like real living rooms. I was welcomed with open arms the first moment I got there.

A: My major is Business Management, so I made sure to take two business classes, two general ed's, and two fun electives. I choose to take steel pan, a musical course that originated in Trinidad. The course teaches you how to make beautiful music on a pan with two sticks. I had never tried steel pan so I thought it would be something fun. I also took a swimming and snorkeling class. It was a great chance for me to learn how to swim since I was not taught as a youngster. To fulfill my major requirements I took Organization behavior and Human Resource Management. I also took Black Experience and History of the Virgin Islands, to learn more about the island. I ended up getting a semester G.P.A of 3.8 and made it on the Deans list for that semester.

Q:  WHAT IS IT LIKE GETTING TO KNOW NEW PEOPLE FROM A  DIFFERENT CULTURE?

A: Meeting friends on the island was very easy. The people there are very polite. Throughout the different times of the days, they would say things like, "good morning," "good evening," and "goodnight" . They would say these kind remarks all throughout the day, even to people they did not know. I thought to myself, this was not the culture in NYC. All of the people are in such a rush and don't have the time to stop and say those things. I decided to go on a tour with the girls I met on the island and the girls from SUNY New Paltz. The Virgin Islands is composed of three small islands, St. Thomas, St. Croix, and St. John. St. Thomas is the capital of all the islands and the most crowded. St. Croix has the most land and less people. St. John is the smallest of the three islands with less people.

Q:  CAN YOU GET A JOB WHILE STUDYING ABROAD?

A: During my stay, I applied for a job working as a mentor for children at a local elementary school between the ages of 9-12. My roommate and I applied for the same job and we were so excited when we got the positions. I have learned so much working with the children and my experience as an E.O.P peer mentor contributed to my success with the children. I knew this job was going to be a challenge because these kids were special kids with behavioral problems. Later I found them to be less challenging when I realized  that all they needed was special attention. They were very skeptical and uneasy with me at first because I was new and did not live in the area or speak the same dialect, but after about two weeks they loved me. I worked with the children after school hours on their homework, reading, and writing.  I love working with children and these kids were wonderful.

All of the mentors were trained by licensed personnel on how to efficiently manage the kids and handle any potential problems. We took the kids out to the beach, field trips around the island, and we had monthly dinners that involved the parents of the children. During this time the children were recognized in the program for their success and improvements. Awards and certificates were given to the children who applied. I thought that this was very important for the kids. They need to see that their parents care about their future and how well they are doing in school.

Q: WHAT ELSE WAS ENJOYABLE ABOUT YOUR EXPERIENCE?

A: I made sure to gobble up the most fun I could possibly get during my stay at St. Thomas. During the course of our spring break we all decided to go to Puerto Rico to attend the musical artist, Usher Raymond concert. We were all so excited about our weekend getaway. Puerto Rico is about 30 minutes away from St. Thomas via plane. Usher is my favorite singer and I was so excited about going to this concert. We stayed at a very nice hotel in the city of Candado. We were all sitting apart from each other in the beginning of the concert. One of the managers alerted my girlfriend and I that there were two seats available in the V.I.P section and if we would rather sit in those seats instead of the seats we had. I almost fell because I was so excited. My girlfriend and I had front row, center stage seats that were directly in front of Usher. Our friends could not believe their eyes. We all had a ball that weekend.

Although I was enjoying myself on the island I made sure to keep on top of my school grades. I was doing very well so far, getting all A's and one B.  U.V.I held a trip to the British Virgin Islands during one of our school breaks. We went to an island called Jost Van Dyke, located in the British Islands. The island was about two hours away from St. Thomas by boat. We had a day full of water rides and excitement.

Q:  WHAT ABOUT FAMILY AND FRIENDS BACK HOME?

A: My parents decided to come and spend a week with me to see how I was living out there. They absolutely loved the 90 degree weather and the people. They missed me so much and complained that I don't call them enough. They could not possibly understand how much fun I was having on that island. I learned so much about myself as well as the people. I missed my family so much but I did not want to leave this island. I felt like I had an extended family down here. I met so many people, worked with wonderful kids, and had an experience of a lifetime.

I remember all of the festivities of the Carnival held in St. Thomas. My girlfriend from back in NYC came to visit me during this time and we had a blast. They had a children's parade and an adult parade. There were about 34 floats for the children's parade and 50 for the adult's parade. All of the mentors and I accompanied the kids during the children's parade on a huge float that drove through the streets of the island. We played beautiful music on the steel pans and had so much fun. I was starting to play the steel pans very well. Carnival is a time to have fun, enjoy the music, the food, and the culture of the different islands. I have never experienced anything like this before and I am so glad and grateful I was given the opportunity too.

A: Time was coming near and it was almost time for me to go home. The semester was officially over and it was time to say final goodbyes. It was very emotional saying goodbye. I did not know I would have had such a priceless experience on this island. I am so grateful that I was given this opportunity and I wouldn't have changed it for the world. I plan to visit the island the next chance I get.

I encourage all students to go away if they get the opportunity. There is so much to explore in the world that you have to go take chances. You may be missing out on the chance of a lifetime. I am extremely glad I decided to go and study abroad. And now I plan to travel around the world.