For the next year, Mike Otis (EE Professor and Solar Car Adviser) is test driving an all-electric Mini Cooper and he's ready to share it with the campus community.

Professor Otis and technician Tom LaBarr (Electrical Engineering) are among 450 people (200 in New York and New Jersey) in the United States participating in this program. Motoring pioneers, as BMW/MINI Cooper call them, will drive the cars for one year in real-world situations and report back to the company. 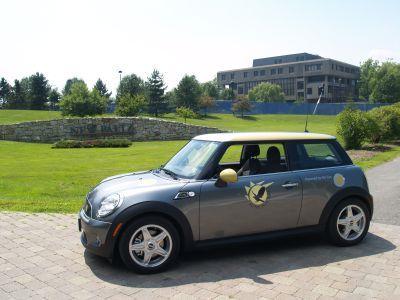 Over the next two semesters, he will drive the car, which is powered by a lithium-ion batteries, to work and show it to students, faculty, staff and visitors. The electronic technology behind the vehicle will also be included in the curriculum for the department's Renewable Energy class.

In addition to collecting data for BMW/MINI, Otis will incorporate the car into his research on electric vehicle technology and a number of student projects throughout the upcoming academic year. John Werner ‘11g and Arthur Cecchini ‘11g, who recently finished their undergraduate degrees at the college, have returned to work on graduate study projects related to electric vehicle technology.

Otis pointed out one of the major differences between a gas-powered car and an electric-powered vehicle is regenerative braking. This advanced braking system allows for recharging of the batteries any time the accelerator is not depressed by the driver.  The electric motor will run in reverse mode and behave as a generator.

"It took a little getting used to it," said Otis. "Now, I actually find it's easier to drive than a gas-powered car."

The Mini Cooper E is not on the market yet. However, Otis wants whoever is interested in taking the car for a test drive to contact him at otism@engr.newpaltz.edu.