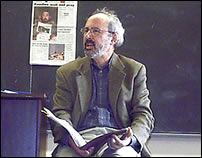 "He gave a lot of opinion writing, and with his background, it gives you a higher expectation of writing. It also gives a higher standard of teaching for other professors."
- Sam Passow, Journalism Alumnus

"My father encouraged aggressive and challenging editorial opinions in Ottaway newspapers and would have admired Buddy Stein's editorials in his Riverdale Press," Ottaway Jr. said. "My father began his career as editor and publisher of the weekly Endicott Bulletin in upstate New York, and would be very pleased to know that Buddy Stein, one of the best weekly newspaper editors of our times, will be teaching the principles of personal, community journalism to students at SUNY New Paltz."
- James Ottaway Jr.

Pulitzer Prize-winning journalist Bernard Stein and poet Robert Polito spoke about writing in response to terrorism at the Writing Board symposium on Thursday, April 18. Read the news release...

Bernard Stein participated in the college's first Media Day, which was to promote interest in the field of journalism. Bernard Stein gave a presentation on community journalism and particpated in a forum that addressed ethical dilemmas facing today's media. Read the news release...

Bernard Stein visited various classes throughout the semester for a series of seminars and workshops. Read the news release...

A course in opinion writing. Its premise is that by writing with passion, precision, courage and insight, journalists can open minds or change them. In each class we examine editorials and columns - most of them prize-winners - beginning from the civil rights movement and continuing to the present in an effort to understand what makes these efforts of persuasion effective. The class is writing intensive and emphasizes the link between careful observation and reporting and successful persuasive writing. Students write and rewrite their own editorials and columns on campus, local, state, national and international issues and are encouraged to publish them in The Oracle and local newspapers. Class discussion is devoted to each student's work to help strengthen his or her writing.

Bernard L. Stein bio:
Bernard L. Stein served as SUNY New Paltz's second recipient of the James H. Ottaway Sr. Endowed Professorship in Journalism. He brought with him extensive experience in editorial writing and community news. He is the editor of The Riverdale Press, a well-known weekly community newspaper covering the Northwest Bronx of New York City, which many consider to be the best weekly newspaper in the country.

The Press's offices were firebombed and destroyed in 1989 in retaliation for an editorial written by Stein defending the right to read the novel "The Satanic Verses" by Salman Rushdie. Stein and his brother, Richard, earned the First Amendment Award from the national Society of Professional Journalists for "exceptional efforts by individuals and institutions to preserve the rights of free speech and free press."

In 1980, he succeeded his father as co-publisher of The Press after becoming editor in 1978. Since then, he has earned more than 350 awards for excellence on behalf of the newspaper on the state and national levels. The Press won the James Wright Brown Public Service Award, the highest honor of New York City's chapter of the Society of Professional Journalists. The paper has been named the best in New York state eight times by the New York Press Association. Also, it has been honored as the best-written weekly in the nation twice by the National Newspaper Association.

Stein earned his bachelor's degree in literature at Columbia University and continued his studies at the University of California at Berkeley. There he was a participant in the Free Speech Movement and arrested in the sit-in in the university's administration building. He was part of a team of scholars editing Mark Twain's writing for publication by the University of California Press for 12 years after graduate school. He contributed to 19 volumes of letters, notebooks and literary works as the edition's textual biographer.

Stein taught the course "Writing to Make a Difference" during the Spring 2002 semester, which focused on discussions of editorial and column writing from the civil rights movement until today.