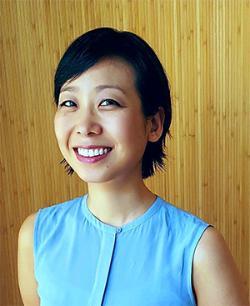 The Department of Digital Media & Journalism at SUNY New Paltz is pleased to welcome Tammy Kim to the campus community as the 2021 James H. Ottaway Sr. Visiting Professor of Journalism.

Kim is a freelance magazine reporter, contributing opinion writer at The New York Times, and a co-host of the Time to Say Goodbye podcast, which focuses on Asia and Asian America.

As Ottaway Visiting Professor, Kim will teach an upper-level journalism seminar titled “Writing Globalized Labor,” a subject about which Kim has written extensively for outlets including Al Jazeera America, The New Yorker, The New York Review of Books, Columbia Journalism Review and The Nation.

As is tradition for the Ottaway Visiting Professor, Kim will also share insights and experiences with the broader community at two public events, both of which are currently planned to take place virtually.

A former legal-services attorney based in New York, Kim has written on topics ranging from housing and labor to Korean literature and politics since transitioning to a career in journalism.

Some examples of her recent work as an essayist and opinion writer provide insight into her ideas about labor, race, nationality and media:

In 2016, Kim co-edited the book “Punk Ethnography,” a case study about contemporary world music produced at the Seattle-based record label Sublime Frequencies. Her previous teaching experience includes undergraduate courses at the Cooper Union, Yale University, the City University of New York and the University of Montana School of Journalism.

The James H. Ottaway Sr. Visiting Professorship, SUNY New Paltz’s only endowed professorship, is named for the founder of Ottaway Newspapers Inc., who was a leader of the American

Press Institute and a lifelong supporter of high quality journalism in the Hudson Valley and across the globe.

The Ottaway Visiting Professorship was established in 2000 through the generosity of James H. Ottaway Jr. ’18 HON and Mary Ottaway ’70g (Elementary Education).

More information about the Ottaway Visiting Professorship, including biographies of previous professors, can be found at httpshttp://www.newpaltz.edu/ottaway/.