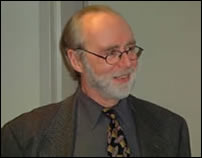 "I was excited to have a Pulitzer Prize winner teach me and to develop a working relationship with him as a mentor."
- Phil Strum, Journalism Alumnus, The Poughkeepsie Journal

Sydney Schanberg spoke to all December graduates about the need to be a "we" generation in the aftermath of the September 11 terrorist attacks. Read news release...
» Read the speech that appeared in the Chronogram

Sydney Schanberg, whose reporting on the killing of 2 million Canbodians in the 1970s won him the Pulitzer Prize, gave the 2001 Louis and Mildred Resnick Holocaust Memorial Lecture. Read news release...

A course examining how proprietors, editors and reporters make choices about what is important in the world and what, in their estimation, is not. It will contrast how aggressively the press covers scandals and wrongdoing in far-away places, and how it reports the same issues more gently in its hometowns, cities and states. The press's reluctance to be a watchdog over its own ethics and standards will be a prime focus. It will be taught from actual examples in the recent history of the American media and from the real-life experiences of the teacher.

Sydney Schanberg is a Pulitzer Prize-winning journalist who has worked as an investigative reporter and columnist. He won the 1976 Pulitzer Prize for international reporting. The Pulitzer is the most prestigious award in journalism. Schanberg garnered the Pulitzer reporting for The New York Times from Cambodia in 1974. His story about aide Dith Pran and Pran's escape from tyrannical Cambodia was the subject of the acclaimed movie, "The Killing Fields," in which Schanberg was a main figure. Schanberg worked for more than 20 years as a reporter at The Times, spending eight years as columnist. His column on New York City politics and events was highly acclaimed. His writing often was devoted to the plight of the poor and the individual and opposed civic projects supported by some of New York's most powerful interests, particularly those in the real estate industry. He was also sharply critical of New York Mayor Edward L. Koch. He received a special James Polk Award for his courageous commentary in 1979.

Schanberg resigned from The Times in 1985 after The Times tried to reassign him from writing a column to the newspaper's magazine. The reassignment came after Schanberg criticized The Times for its support of the Westway highway project. Many believed that the reassignment was in retaliation for his criticism.

"People used to ask me if I were told what to write, and the answer was always no," Schanberg said at the time. "I always took pride in that. This decision to discontinue the column is not part of that tradition, and that is what saddens me." Schanberg's resignation was heralded in journalism as a courageous and principled act.

Schanberg then went on to write his column of commentary in Newsday until 1998. At that time Schanberg became chief of an investigative unit for an online news service. He was the first James H. Ottaway Sr. Endowed Professor at SUNY New Paltz.