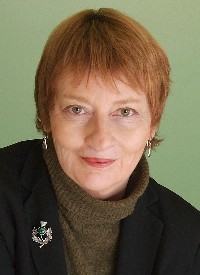 Professor Lieberman "taught students to relect on journalism and question what we see and read in the news.," said Lucie Gautheron, a junior majoring in journalism. "She always encouraged students to push themselves."

"The Media and the Marketplace." A course that examines how media organizations function as profit-making institutions and try to preserve their role as watchdogs for the public interest. It will look at how the imperative to turn a profit affects the news, and it will examine whether the business model of newspapers and magazines is viable in the age of web blogs and other interactive communications. The course will also examine consumer reporting and news you can use and whether hard-hitting consumer stories are compatible with the advertising necessary to sustain today's media corporations.

When Trudy Lieberman graduated from the University of Nebraska in 1968 with degrees in home economics and journalism, women were not encouraged to go to law school or medical school or even to pursue a graduate degree. Home economics was considered a backup in case a woman just stayed at home.

But luckily for American consumers and the world of journalism, Lieberman ignored society’s antiquated cues and took a job as a reporter with the Detroit Free Press right out of college, becoming one of the nation’s first full-time consumer-watchdog journalists.

"I was always very curious about why things happen the way they do," Lieberman says. "Everywhere I looked, I saw a story that needed to be written."
At a time when Ralph Nader-spurred consumer reforms were in full swing, Lieberman spent eight years uncovering abuses by business that helped lead to new state laws in Michigan. She then followed the path of consumer advocacy in 1977 by going next to Consumer Reports Magazine, the largest magazine in the country that investigates consumer problems and advocates for various reforms.

She spent a total of 20 years at the magazine, eventually becoming the magazine’s senior investigator and health policy editor - and one of America’s foremost and best known consumer reporters. "Trudy Lieberman brings an old tradition to the New Paltz campus - the journalist who looks out for the consumer and exposes when the marketers try to dupe and delude the people," says Dr. Robert Miraldi, a journalism professor who has written extensively on the history of investigative reporting.

Because of her groundbreaking work, Lieberman has garnered 21 journalism awards, including 10 from the National Press Club, four from the Society of Professional Journalists and two National Magazine awards. She has authored five books on a variety of topics, from life insurance and retirement planning, to political influences on the media.

Lieberman understates the importance of her work, saying simply: "Journalists need to report fairly and honestly about what businesses are doing. They need to focus on what’s good for the public interest." And Lieberman’s work has consistently done that by providing important information for consumers, especially recently, in her writing about the multiple problems facing the American health care system. In particular, Lieberman has followed the long tradition of journalism to focus its attention on the voiceless - those who are uninsured or being denied health coverage.

"She proves once again what journalism can be when at its best," points out College President Steven Poskanzer. And, he added, she "continues the college’s tradition of bringing to campus journalists with a commitment to important issues."
Lieberman is currently completing a book tentatively entitled The Growing Divide - Who Will Have Medical Care and Who Will Go Without for the University of Southern California Press. It is due out in 2008 at a time when the Presidential candidates will be arguing over various approaches to health care. "The stark truth is that health policies and practices in the United States ration health care," Lieberman has written, a condition she bemoans in her work.

As a contributing editor for the nation’s foremost magazine of journalism criticism, the Columbia Journalism Review, as a contributor to the progressive Nation magazine, and as a health columnist for the Los Angeles Times, Lieberman has written consistently about the needs of the nation’s poor and under-served. "She is a seasoned professional who has and continues to do important work and who will show our students what journalism can do to improve and reform a market-based society," says Pat Sullivan, the chair of the college’s Communication and Media Department.

For example, an award-winning 1993 article she wrote about the lack of government control over the fish industry helped lead to reforms at the U.S. Food and Drug Administration. Many of her reports have had wide national impact, attracting the attention of policymakers, academics, and the media.

Students got the benefit of Lieberman’s expertise in the spring 2007 semester when she taught a course on "The Media and the Marketplace," examining how media organizations function as profit-making institutions and yet still try to preserve their role as watchdogs for the public interest. "The great thing about her class was that she developed it as an opportunity for students to reflect on the media and analyze it," commented junior journalism major Lucie Gautheron. "She always encouraged students to push themselves."

But students were not the only ones to benefit from the 2007 Ottaway professor. "Class is wonderful, I leave everyday feeling great," Lieberman said. "I just tell my students to never quit looking for stories."

1970-1999 -- Wins 21 Journalism awards, including 10 from the National Press Club, four from the Society of Professional Journalists and two National Magazine Awards

1988 -- Writes Life Insurance: How to Buy the Right Policy from the Right Company at the Right Price.

1992 -- Writes How to Plan for a Secure Retirement

1995-2003 -- Becomes contributor to The Nation, America's leading Progressive magazine. Writes 14 articles on topics ranging from Medicare to hunger in America.

2000 -- Writes Slanting the Story: The Forces That Shape the News, a look at the hidden influences on the media

2000 - Writes Consumer Reports Complete Guide to Health Services for Seniors, which Library Journal called one of the best health books of the year.

"Nobody wants to think about healthcare until they get sick," consumer reporter Trudy Lieberman, one of America's foremost consumer reporters, told an audience assembled to hear her discuss health care reform. But for many Americans, just thinking about health care and how to pay for it might make them sick. That, in part, was the message of James. H. Ottaway Journalism Professor Lieberman in her April 16 campus speech in which she outlined a variety of reasons why -- despite the fact that millions are uninsured in America - she was doubtful that meaningful reform of health care would occur any time soon. "The current healthcare system does work," Lieberman concluded, tongue in cheek. "As long as you never get sick or stay continuously employed."

As Lieberman pointed out approximately nine million children under 18 are now without health insurance, and one-third of Americans 18 to 26 years old and one-quarter of the 27- to 34-year-old population are also uninsured in the United States. Lieberman told the story of a woman in Tennessee who told her she was glad to have breast cancer because it meant that her health insurance would cover that ailment, although it would not cover other ailments.

In other cases, Lieberman recalled, people told her that their insurance would only pay for certain diseases to be treated and so doctors had to make choices about what treatment they were eligible for.

"In some cases, you go to school or you afford health insurance," she said. "You don't do both."

After more than 20 years researching consumer and health issues, Lieberman has become one of the nation's foremost experts on the issue of health insurance, focusing especially on coverage for the elderly and the poor. She has written numerous books and articles on the topic and is currently working on a book for the University of Southern California Press on the health care divide in America. In addition she has studied health care in countries around the world, from Japan to Germany.

And it is a question Lieberman has been researching for many years. Her quest for knowledge on the American healthcare system began in 1992, she explained, when she began researching the systems of other countries for Consumer Reports magazine where she had long been an investigative reporter. Well-known Canadian health economist Robert Evans told her that the American healthcare system would never be reformed. Americans, he said, "were all too busy trying to sell things to each other."

"It's all about selling now, all about business," Lieberman agreed. "What's important in this system is selling healthcare, not promoting health."

And money and the desire to maximize profit, Lieberman feels, is the leading reason why healthcare reform will not happen. National health insurance might put insurance companies out of business, and that might explain why the industry gives considerable money to political candidates, she said. The drug industry is also profit driven, and might be equally threatened by a new system of regulation and reimbursement. Putting a national healthcare system into place would economically destroy - or severely damage -- both of these industries, she pointed out.

Although pessimistic about basic changes to health care, Lieberman did outline a variety of possibilities for meaningful change even though the government was just barely "tinkering at the edges" of reform.

Solidarity, for example, is a program used in Germany that covers all citizens. All citizens donate toward healthcare with the assurance that the money will be there when they are sick, somewhat like Social Security. Or the taxpayer-funded Medicaid (health insurance for the poor) and Medicare (health coverage for the elderly).

Another solution she cited was to extend the period of time that children are allowed to remain on their parents' insurance policies. However, she said, employers are unlikely to support this since it means higher costs for business.

An "individual mandate" is the most popular solution Lieberman noted in which every person is responsible for his or her own health insurance with federal government completely uninvolved. The problem with this suggestion is that insurance is expensive, and what would happen to those who cannot afford it?

"It seems a rather cruel and unusual punishment for being poor," Lieberman said. The media play a significant role in healthcare, she commented. In a recent article entitled "Epidemic" that Lieberman wrote for the Columbia Journalism Review, she showed how arrangements between local hospitals and television stations work to produce only positive stories, all without the knowledge of the public. These stories are passed off as "news," and the hospitals' name is mentioned repeatedly to the public, making it difficult to create informed healthcare consumers. She has written about similar patterns of manipulation of a willing press by pharmaceutical companies.

In 2003, Lieberman said that a report calling for universal care was rejected by the Bush Administration because it wasn't market oriented enough. New Mexico Governor Bill Richardson's solution for universal healthcare would involve taking money spent on the war in Iraq and funneling it into a healthcare system instead. Lieberman's response was simply, "Good luck."

Life Insurance: How to Buy the Right Policy from the Right Company at the Right Price, Consumer Reports Books (1988).

How to Plan for a Secure Retirement, with Dickman Barry, Consumer Reports Books (1992).

Slanting the Story: The Forces That Shape the News, New Press (2000).