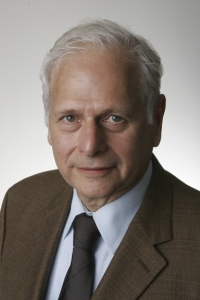 This course will examine the enduring characteristics of serious journalism at a time when an intensifying 24-hour news cycle can make it easy to overlook them. Balance, context, smart skepticism, resourceful and investigative reporting, informed advocacy, elegant and original writing and impactive but fair-minded packaging are among the topics that will be considered. We will look at examples from the mainstream, tabloid, and alternative press as well as at encouraging models from the web.

Martin Gottlieb is a rare bird. He has soared and succeeded in three distinctly different worlds of American journalism—the hurly-burly world of tabloid journalism,  dignified and vital establishment news, and the eclectic happenings of the alternative press.

But one constant in Gottlieb’s 35 years working in journalism has been his commitment to the importance of news and information. Whether helping lay the foundation for the rebuilding of a devastated New York City neighborhood or the dismantling of a corrupt for-profit hospital corporation, Gottlieb has practiced journalism as it should be – aggressive, serious and steadfast.

“And that is why,” commented College President Steven Poskanzer, “Gottlieb was an easy choice to become a our next James. H. Ottaway Sr. visiting professor of journalism because he continues New Paltz's tradition of bringing passionate journalists who have worked at the highest levels of the profession.”

Gottlieb follows a long line of well-known journalists who have held the Ottaway Professorship, including three Pulitzer Prize winners and a famous American author. But he has his own unique blend of credentials.
He is an award-winning investigative reporter and long-time editor at The New York Times.  He has been a reporter and high-level editor at the New York Daily News, America’s most famous tabloid newspaper.  And he was the top editor at the Village Voice, America’s quintessential alternative publication.

“Gottlieb has done it all,” commented New Paltz journalism professor Robert Miraldi. “He has worked the streets of New York City, he has investigated high-level corruption, and he has made decisions about what will grace the pages of the world’s most important newspaper. Students can learn so much from his experiences.”

While at New Paltz for the spring 2008 semester, Gottlieb is teaching a class called “Quality Journalism.”
Gottlieb’s class will examine the enduring characteristics of journalism at a time when an intensifying 24-hour news cycle can make it easy to overlook them. Balance, context, skepticism, resourceful and investigative reporting, informed advocacy, elegant and original writing and fair-minded packaging are among the topics that will be considered. Students will look at examples from the mainstream, tabloid, and alternative press as well as at encouraging models from the Internet.

About the class, Poskanzer added that it “comes at a time when we all must look carefully at what we need from the profession as technology challenges so many of our institutions.”

Gottlieb said he hoped he could help students “focus on the best journalistic practices, ones that ought to serve as bedrocks and guideposts at a time of enormous change in the profession.” The class, he said, will “explore the values and work practices that lead to distinguished journalism.”

Six well-known journalists have preceded Gottlieb as Ottaway professors. Three have been Pulitzer Prize winners, including former New York Times investigative reporter Sydney Schanberg; Bernard Stein, an editorial writer with the Riverdale Press in the Bronx; and John Darnton, a former Times foreign correspondent. The other professors were award-winning National Public Radio reporter Ann Cooper, who headed the nation’s foremost advocacy group for the protection of journalists, Roger Kahn, the author of 20 books and one of America’s foremost literary journalists, and Trudy Lieberman, one of America’s best consumer reporters.

Although Gottlieb began his career in 1971 as a reporter with The Record in Hackensack, N.J., he has long been associated with New York City journalism.  He was born on the Lower East Side of Manhattan and learned about life on the streets of the city, a knowledge that paid off when he first became a reporter at the New York Daily News, the tabloid newspaper that has long closely covered and written about city life and was the nation’s largest circulation publication.

For eight years he was a reporter at the News, where he covered police, housing and poor neighborhoods and spearheaded a series of articles on the Bushwick neighborhood of Brooklyn after the great power blackout of 1997. The series spurred a massive government effort to rebuild the community.

He then moved to the Times in 1983 to work on its metropolitan desk, a stark departure.  The News is known as the paper of “the people” while the Times is a more staid, sober and serious publication that often mirrors concerns of the political establishment.. But Gottlieb easily made the transition, becoming an integral part of the newspaper’s metropolitan staff. He wrote stories on topics ranging from controversies at the city’s annual St. Patrick’s Day Parade to the redevelopment of the Midtown section of Manhattan.

For three years Gottlieb wrote extensively about major new housing plans and development that was taking place as New York City went through a revival. But in 1986 he left the Times to become editor of New York’s famous alternative weekly, the Village Voice. The Voice was America’s first alternative weekly newspaper in the 1950s, and is still the best known alternative paper in America.  At the Voice Gottlieb presided over a newspaper the took pleasure in tweaking the establishment – especially  the New York Times.

Nonetheless, after four years at the fractious Voice, Gottlieb was beckoned back to the Times to become its special projects editor. In 1997 articles by a team of reporters run by Gottlieb on dubious practices at the nation's largest for-private hospital chain helped lead to indictments, a nearly billion dollar settlement with the government and a shake up of its board and top management. The project won a George F. Polk Award in 1998. The Polk is one of journalism’s highest honors.

Gottlieb was then asked to take one of the Times’ top editing positions as he became the second in command of the Times influential culture and arts and leisure sections. He is currently associate managing editor at the Times in charge of the newsroom on weekends, one of the top positions at the newspaper. He shapes the Sunday and Monday news reports and runs the newsroom on Saturdays and Sundays. He also served as a visiting editor at the International Herald Tribune in 2004 before taking on his current duties.

In addition to his reporting and editing. Gottlieb has taught journalism for many years. He served as the Gannett visiting professor of journalism at the Columbia Graduate School of Journalism in 1989 and for more than 20 years he has taught political and governmental reporting classes at Columbia.

Gottlieb is a graduate of Queens College with a degree in political science and has a master’s degree in journalism from Columbia University.