During the summer of 2017 the students in Dr. Shafiul Chowdhury’s lab have been examining the effects of agricultural practices on local streams. They are testing water quality parameters that may indicate that runoff from agricultural fields is impacting the aquatic environment. Kamal James, a sophomore from Dutchess Community College says their assumption is that the process of treating pollution with dilution doesn’t work. “I never really thought about it but there are negative effects of agriculture” says Kamal. In addition to field sampling, the students are learning new skills in the lab. Taylor Lorenzo, a senior in Environmental Geochemical Science says “I have been using the skills I learned in GIS class to map out our data,” adding a new dimension to the analysis. Stephanie Fernandez, a senior in Mechanical Engineering, added that “for the lab testing I needed to understand chemistry; I have been learning to use lab instruments like the spectrophotometer to measure ammonia and total organic carbon”. 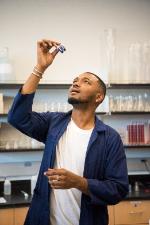 The students in professor David Richardson’s lab group have been researching lake acidification in the Sky Lakes. During the summer of 2017, Philesha Teape and Nyoka Bigsby have been collecting data on the lakes and comparing 40 years of pH data gathered previously. Philesha, a rising sophomore in Biology says “looking at the data we can see that the pH of the lakes has been steadily increasing since the passage of the Clean Air Act amendments”. Nyoka, a senior Biology major, added that “we have been collecting samples for pH, conductivity, total dissolved solids, dissolved oxygen, chlorophyll, and phosphorus”. Although not all of these parameters have historical data for comparison, they both would like to continue this research and be able to add it to the analysis.

Students in Dr. Catherine Herne’s group conducted quantum experiments to demonstrate the dual nature of light. They tested the behavior of light as a continuous stream of particles called photons, and as continuous stream of electromagnetic waves. They were able to demonstrate each behavior by splitting a beam of light and redirecting the two beams across each other, causing interferences that only occur with waves. These experiments reinforce concepts learned in the classroom; “It has been good to re-learn topics like the superposition principle, but learning the instrumentation is new for me” says Rui Gomes, a senior in Physics. His lab partner Mark Castellanos, a sophomore at Dutchess Community College has contributed by “working on programming the microcontrollers since I have done coding before, and learning to analyze the data”.

Summer Research Program participants Warren Wilson and Samir Bah Rabiou, a senior in Mathematics and a junior in Computer Engineering respectively, have been investigating Mandelbrot and Julia sets with Dr. Anca Radulescu. Their research aims to explore the result of adding perturbations in the production of Julia and Mandelbrot sets using binary templates. With a Julia set you typically have one constant, but they are using a binary template, which is a series of ones and zeroes, to alternate the constant. The Mandelbrot set defines the parameter space of the Julia set. So if you think of DNA replicating itself, you can ask: what is the consequence of the DNA not being replicated completely? Warren added that “as a result of this research I can see how this field of mathematics can be used to parameterize real world behavior”. 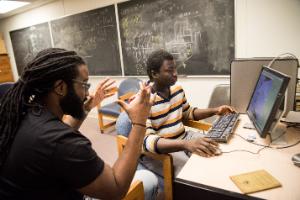