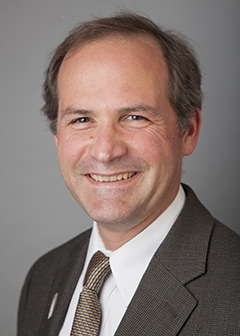 Dean of the School of Science & Engineering

Daniel Freedman was appointed Dean of the School of Science and Engineering at the State University of New York at New Paltz in April 2012, after serving as interim dean since August 2011. Previously, he was Chair of the Chemistry Department and the recipient of a 2009 Chancellor’s Award for Excellence in Teaching.

Freedman is responsible for managing and directing the School of Science and Engineering, including undergraduate and graduate programs in astronomy, biology, biochemistry, chemistry, computer science, engineering, environmental geochemical science, geology, mathematics and physics. He creates and implements strategic initiatives, maintains administrative oversight and promotes the science and engineering program offerings ensuring that they consistently maintain high standards of scholarly rigor and excellence in research. Founded in 2001, the School is committed to the highest standards in the teaching of science, mathematics and engineering and promoting scientific discovery, innovation and research and the practical application of research for the local, national and global betterment of humanity.

An integral part of the School’s mission and focus is on student and faculty partnership in research. The results of these research efforts are evident in both the sustained output of high-quality, peer-reviewed publications and faculty and student presentations at regional, national and international professional meetings and conferences. Science and engineering students also regularly present their research findings at local, regional and national conferences.

The School recognizes that the success of its students as future scientists and engineers is contingent on their proficiency in conducting scholarly research and their ability to cogently present their findings to colleagues.

Freedman brings extensive experience in administration and the advancement of student and faculty collaborations in research to his new role. From 2002 to 2009, Freedman served as associate professor and chair of New Paltz’s Department of Chemistry, where he was very active in research, teaching and administration. He implemented significant departmental changes, including the hiring of four faculty and two successful tenure decisions, the addition of interdisciplinary programs in Environmental Geochemical Science and Biochemistry and the complete overhaul of the chemistry curriculum.