The painting collection was started in 1939, when the university acquired a single painting on an extended loan from the W.P.A. Hasbrouck House (New Paltz, NY) by James Scott, became a cornerstone piece in the museum's collection of paintings. Today the collection ranges from 17th to 20th century American, European, and Asian works, with a special emphasis on paintings by artists from our region. In keeping with the regional emphasis of our mission and programming, the museum has a special interest in collecting, exhibiting, and interpreting the work of artists associated with the Hudson River School and the Woodstock Colony for the Arts. Our exhibition, research, and interpretive programs extend to the fertile contemporary art scene in the region as well. The museum is deeply committed to bringing a complementary critical focus to the work of the modern and contemporary artists who have called the Hudson Valley home. 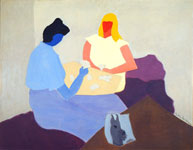