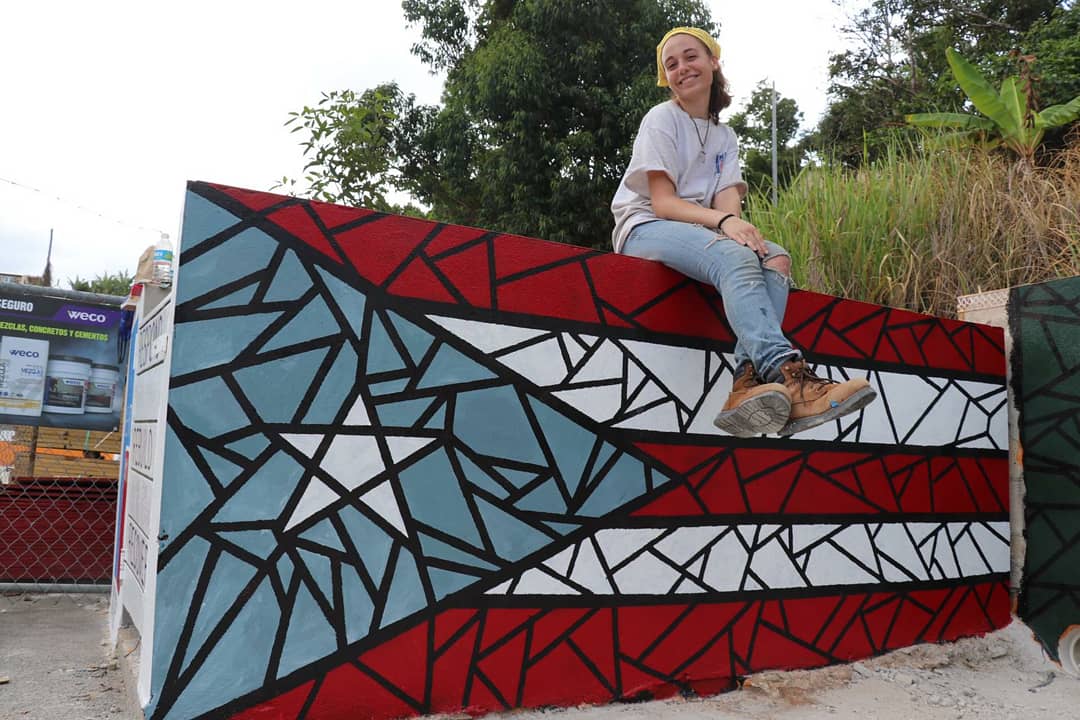 We would like to introduce you to SUNY New Paltz student Alyssa Dudinyak, who recently went on a service trip to Puerto Rico with non-for-profit Heart 9/11 as part of the "SUNY Stands with Puerto Rico Summer Initiative" to help rebuild the communities which were devastated by Hurricane Maria. Although, her story is a bit different from the other students in the program. During her time in Orocovis, PR, she was touched by the story of the community coming together after the tragedy to rebuild. After finding out that Alyssa was an artist, members of the community asked her to paint a mural for them to highlight their story.

Hear what she had to say about her experience of helping in a time of crisis, and as she put it, "the most incredible experience of my entire life, hands down" below, along with pictures of her amazing work.

"If you told me a year ago I’d be painting a mural in Puerto Rico, I’d call you crazy. Opportunities like that are the kind that only exist in movies or dreams after all, not in reality.

Apparently, I had the completely wrong mindset.

Originally I applied to and was accepted into the SUNY Stands with Puerto Rico Summer Initiative—a program designed to deploy New York college students to help the people of Puerto Rico rebuild after the devastation of Hurricane Maria. I applied on a whim, applying and receiving an acceptance letter before I even told my parents about the program. Ultimately, I was selected to go to Puerto Rico from June 16th – June 29th alongside four other New Paltz students and two SUNY chaperones. At midnight, my family left home to drive me to JFK for the eight AM flight.

We stayed in the mountains of Puerto Rico alongside six other CUNY students and two chaperones who we’d be working with for the entirety of the two-week deployment.

Things began as expected. I was firstly assigned to distribute wood to all the other worksites, lifting, loading, and unloading the supplies from a truck so they could be used by the workers. For the remainder of the four workdays that week I worked at a home in Orocovis, helping a local team of HEART 9/11 (the biggest non-profit in the area) volunteers reconstruct the home from the ground up. When I got there, a single wall existed atop a concrete slab and when I left, the roof had been prepared with crossbeams.

The work was exactly what I expected. Light construction as described. Yet, for me, that quickly changed.

After work one night I was speaking to Neftali, a manager of the HEART 9/11 program in Orocovis and the one who was coordinating our meals and stay at our lodging. We were making small talk: school, family life, interests. I proudly told him my major at SUNY New Paltz was Art Education and instantly, his eyes lit up, demanding to see my work. I showed him photos of my art and he paused and looked at me. He spoke very little English.

They were words I never expected to hear. I thought he was kidding. But no. In that moment, after only four days in Puerto Rico, I was asked to paint a mural on a huge public wall in Orocovis. It felt surreal. It felt like something straight out of a movie.

In two days I had sketches and in four days there was a paintbrush in my hand. Neftali asked me to paint a mural on the wall outside of his hardware shop, detailing the destruction of Hurricane Maria and how he and the community helped it recover. He gave me a list of a few requirements (the Puerto Rican Flag, a damaged home, a repaired home, and the HEART 9/11 logo) and the rest was on me.

A lot of my ideas for the mural came from conversations I had with local members of the community. They would tell me with passion in their voice the symbols, words, and stories that helped form the community I saw today. They were the things that the people drew their strength from. I thus included the image of the first man HEART 9/11 helped, the local flag, an abstract depiction of the Puerto Rican spirit breathing new life into the damaged land, and local plants. I included the saying “Juntos nos levantamos” (Together we rise) as it is a highly popular, recognized statement that people still say to this day. I wanted the mural to be colorful and teeming with life, much like I found the Puerto Rican landscape to be like. There was an unmatchable energy in the people and land that I hoped to encompass in my work.

In the five days I was given originally, I was only able to complete about half of the wall. I tried to rush and get it to a point where I could call the painting done despite only filling half of the wall. Neftali told me not to worry, “I’d come back”.

At first I thought he was kidding but then, two weeks later, HEART 9/11 flew me back to Orocovis to finish the wall. I couldn’t believe the generosity of the community. The mural meant that much to them that they were willing to see it finished, no matter the cost.

With that same attitude, I worked tirelessly for five days from 7 AM each day until dark. Five days after my second arrival, I finished the mural by flashlight, an hour before I had to leave for my flight.

It's been a rollercoaster. One cancelled flight, a few days of rain delay, and one bout of food poisoning...but here it is. Finished. Forever.

The people kept me going. The people of Orocovis, Puerto Rico are the most resilient, humble, and generous people I have met. They have had their homes destroyed and yet they continue to rebuild stronger. This mural means everything to the people. Local art is very popular and common, especially in the urban and residential areas as people view it as a loud and proud public display. Art traverses language barriers. Art is loud. It is timeless and beautiful--much like the people.

I have found a second family and a second home in the three weeks I have been in Orocovis this summer. The people have embraced me with open arms--embraced me as one of their own. It would warm my heart to see how my mural brought so many groups together: SUNY, CUNY, and locals of the community. Everyday, a different person would show up and ask to help. I’d draw something and have them color in a section, teach them how to paint.

I'm proud to represent a lot of people: New York State, SUNY New Paltz, Apalachin NY, Puerto Rico, the Orocovis community, and the Dudinyak family. I'm proud and humbled to be given this once in a lifetime opportunity. I stand behind my work. I stand with Puerto Rico.
This one is for you, my second family, my second home now...with love always.

A part of me will now forever remain in Puerto Rico, as long as that wall stands." - Alyssa Dudinyak 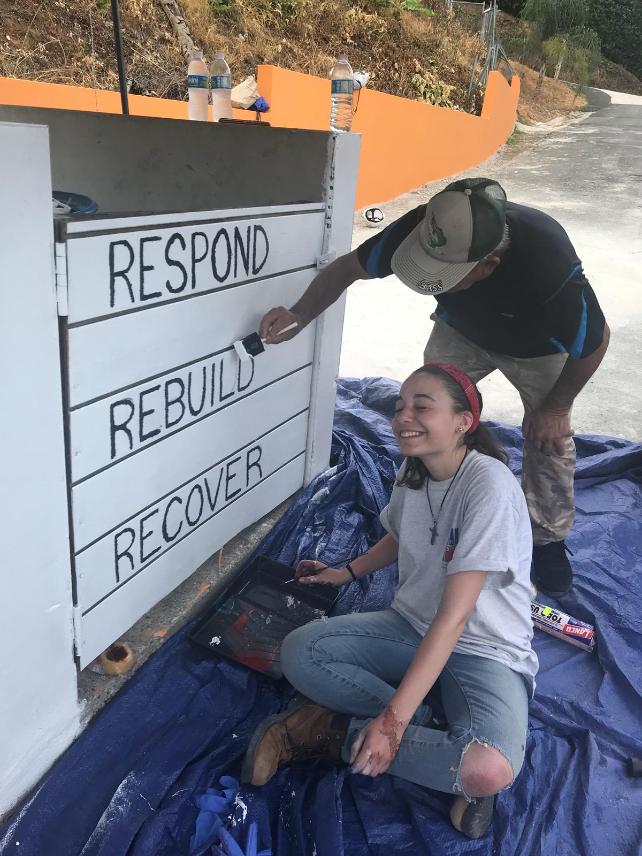 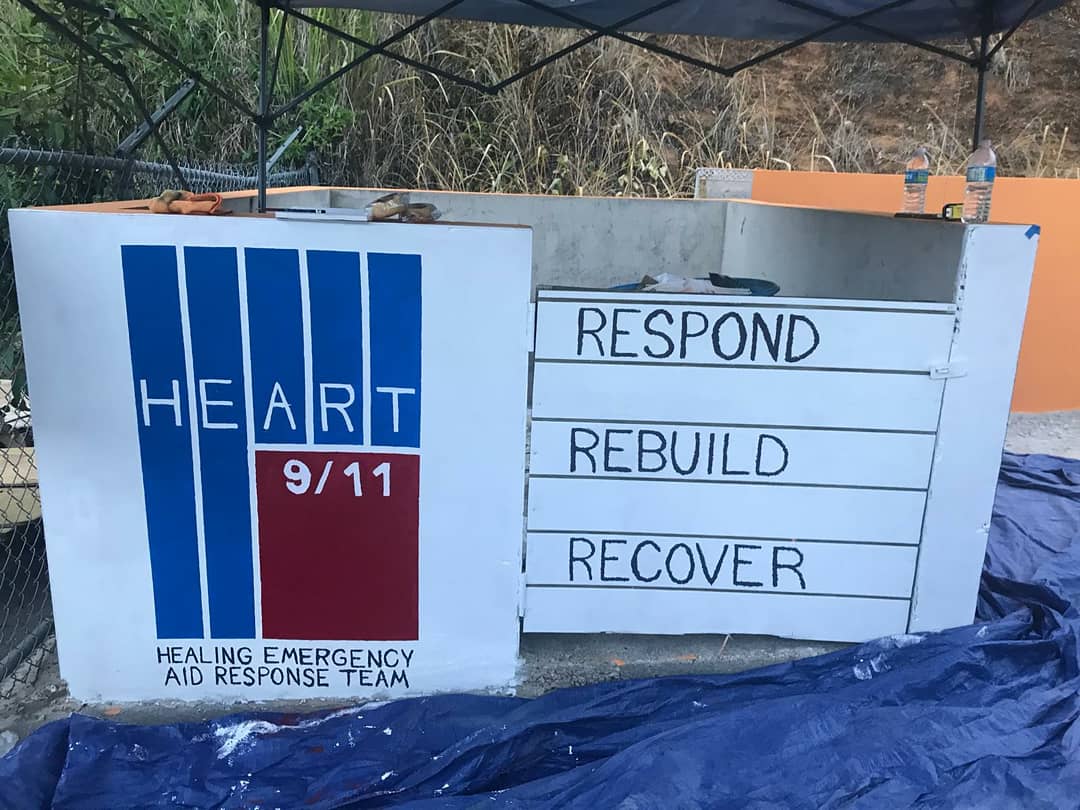 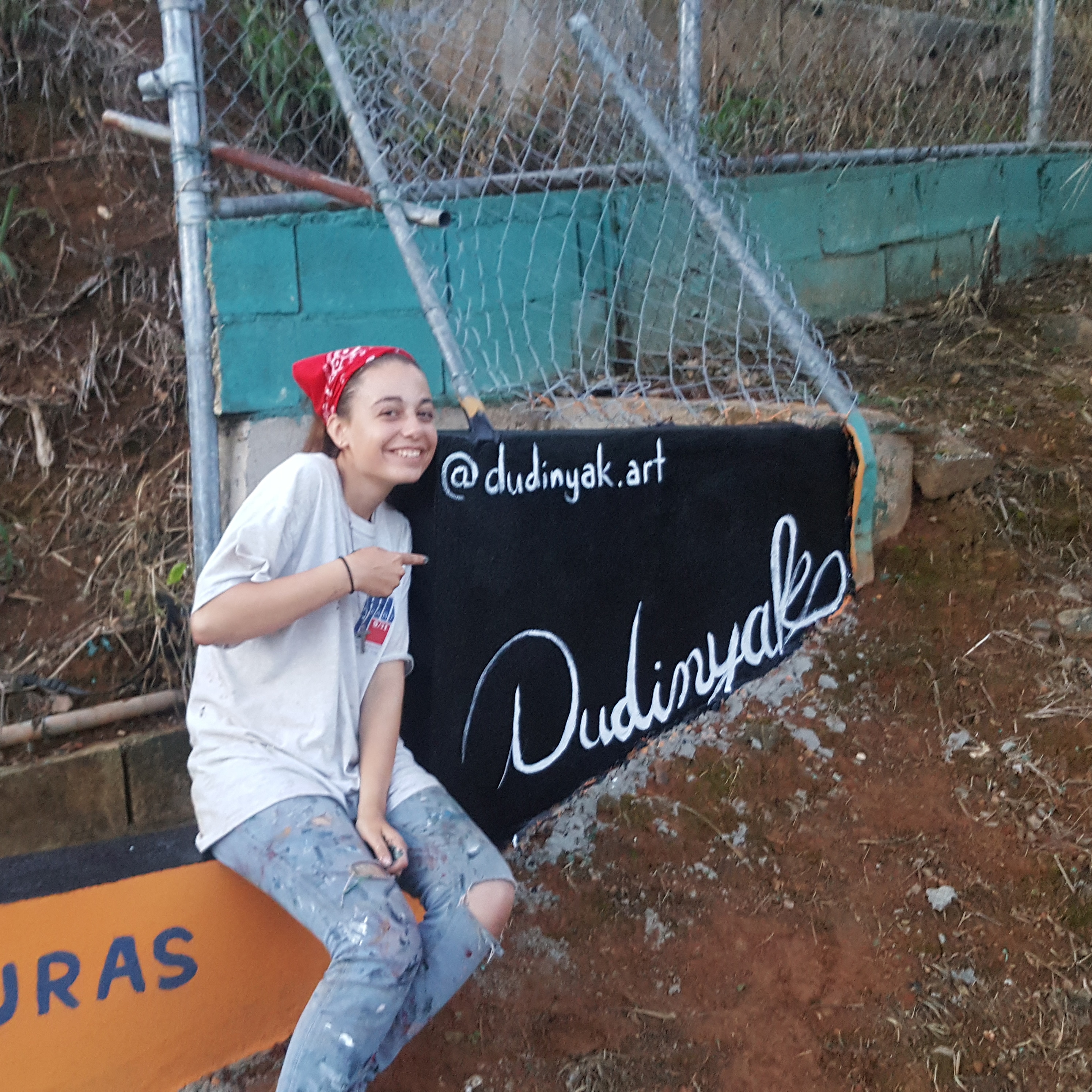 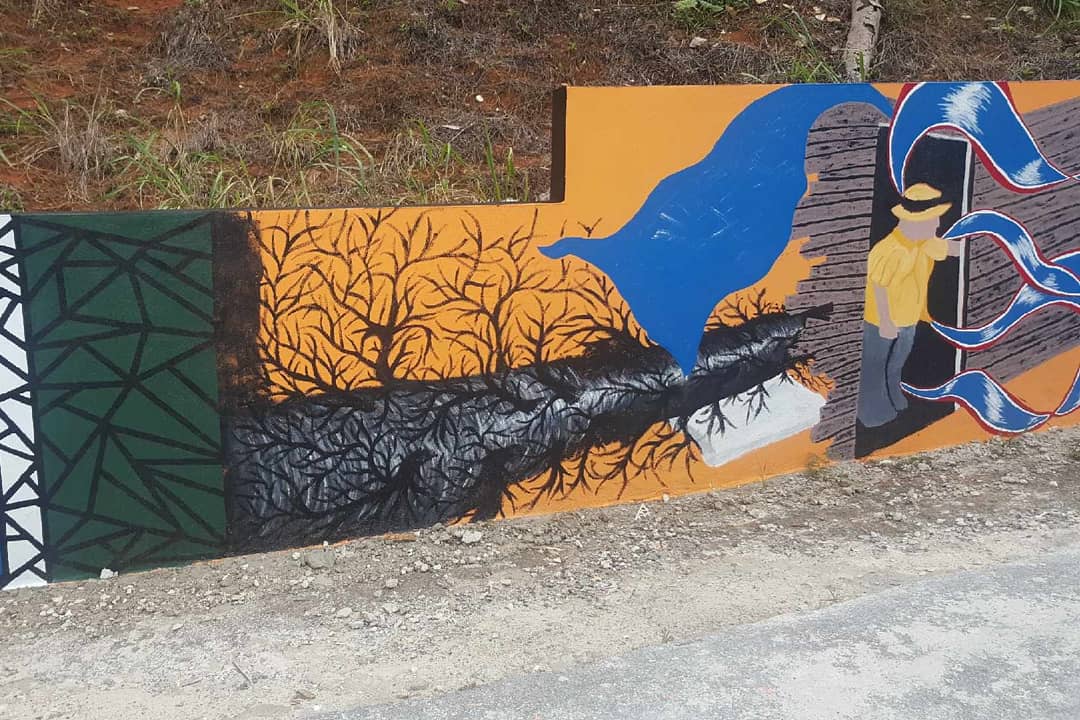 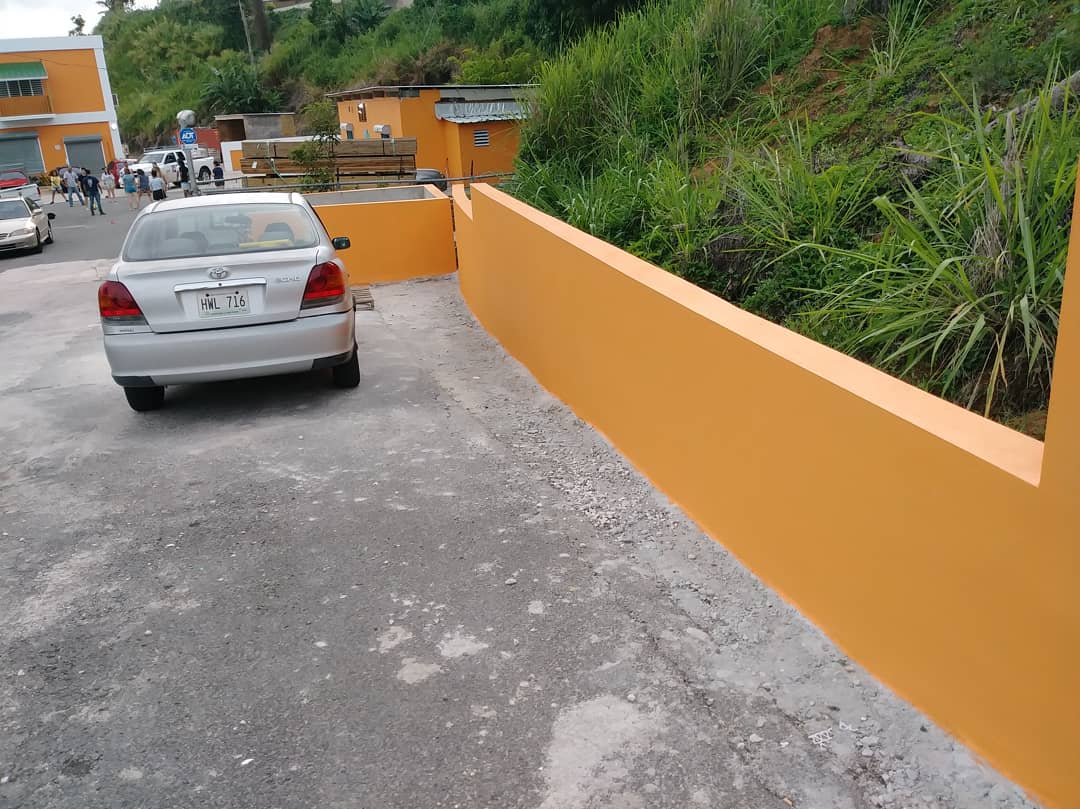 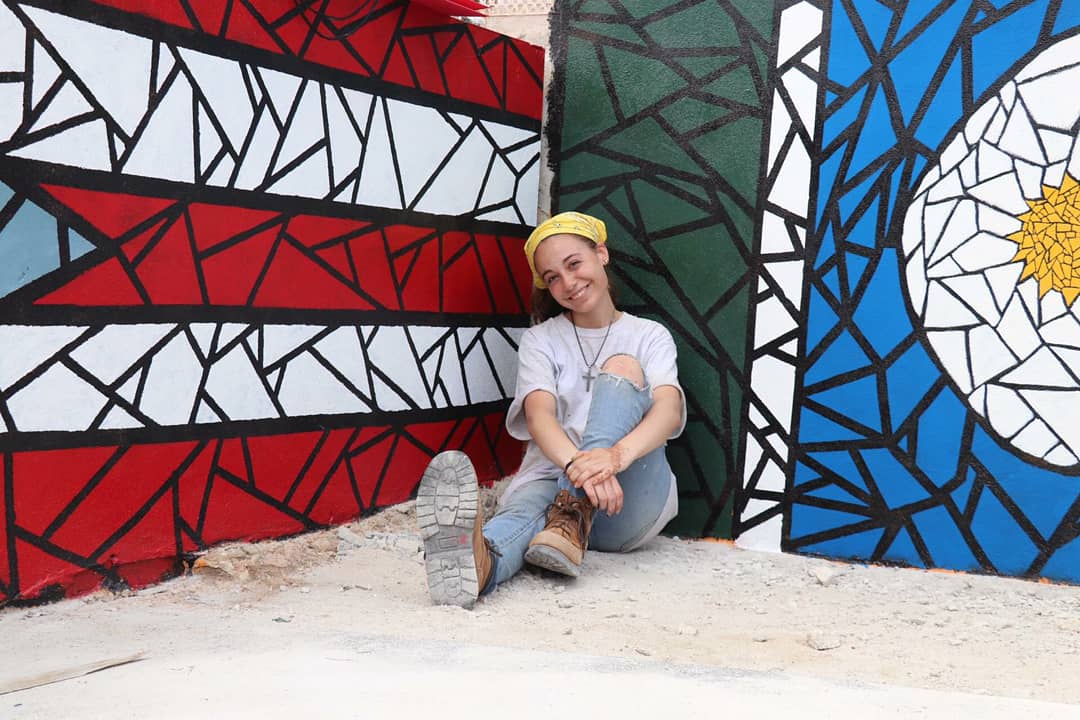 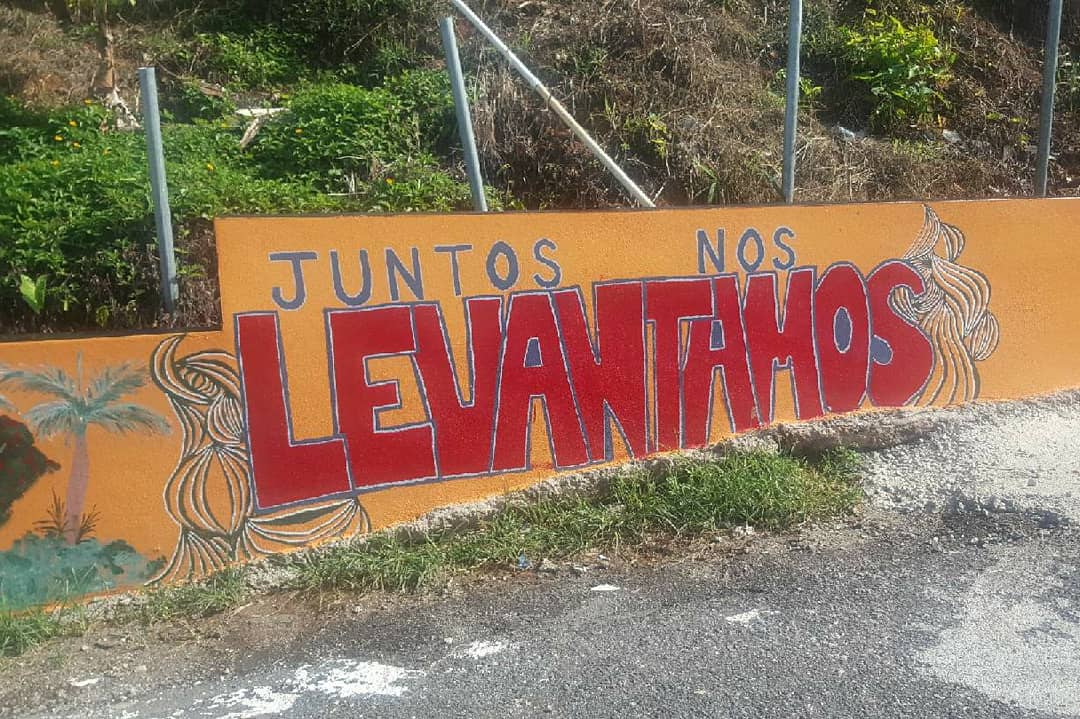 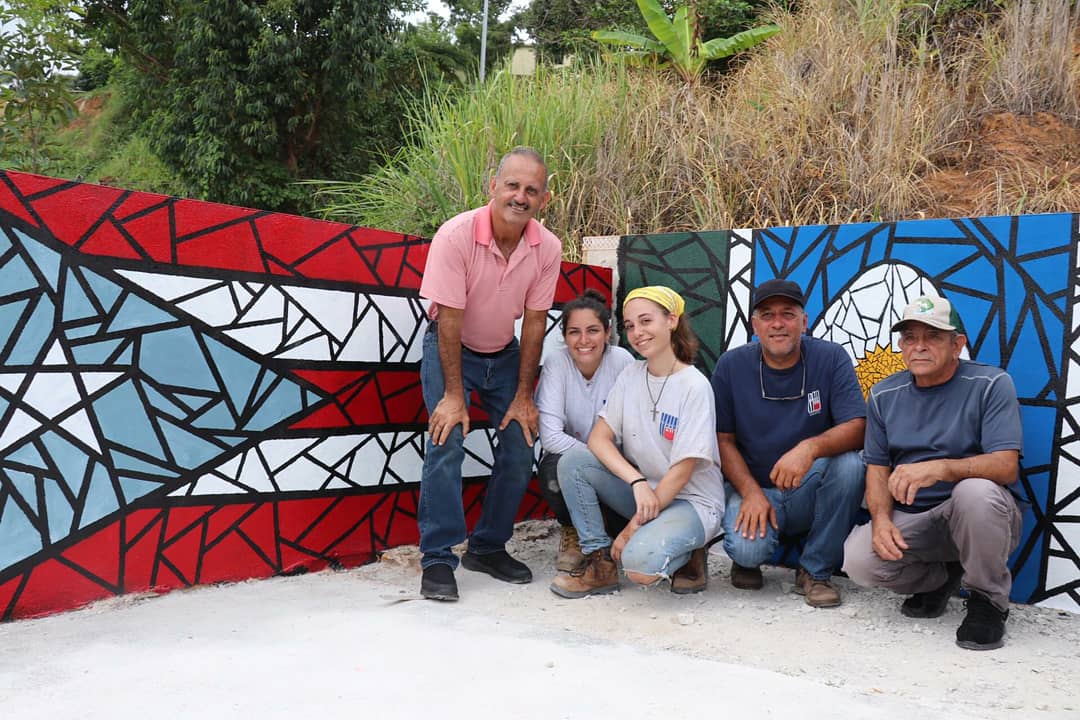 Alyssa (pictured wearing a yellow headband) posing with members of the Orocovis community, along with Neftali (pictured in a pink shirt) who was the one to ask Aylssa to paint the mural. 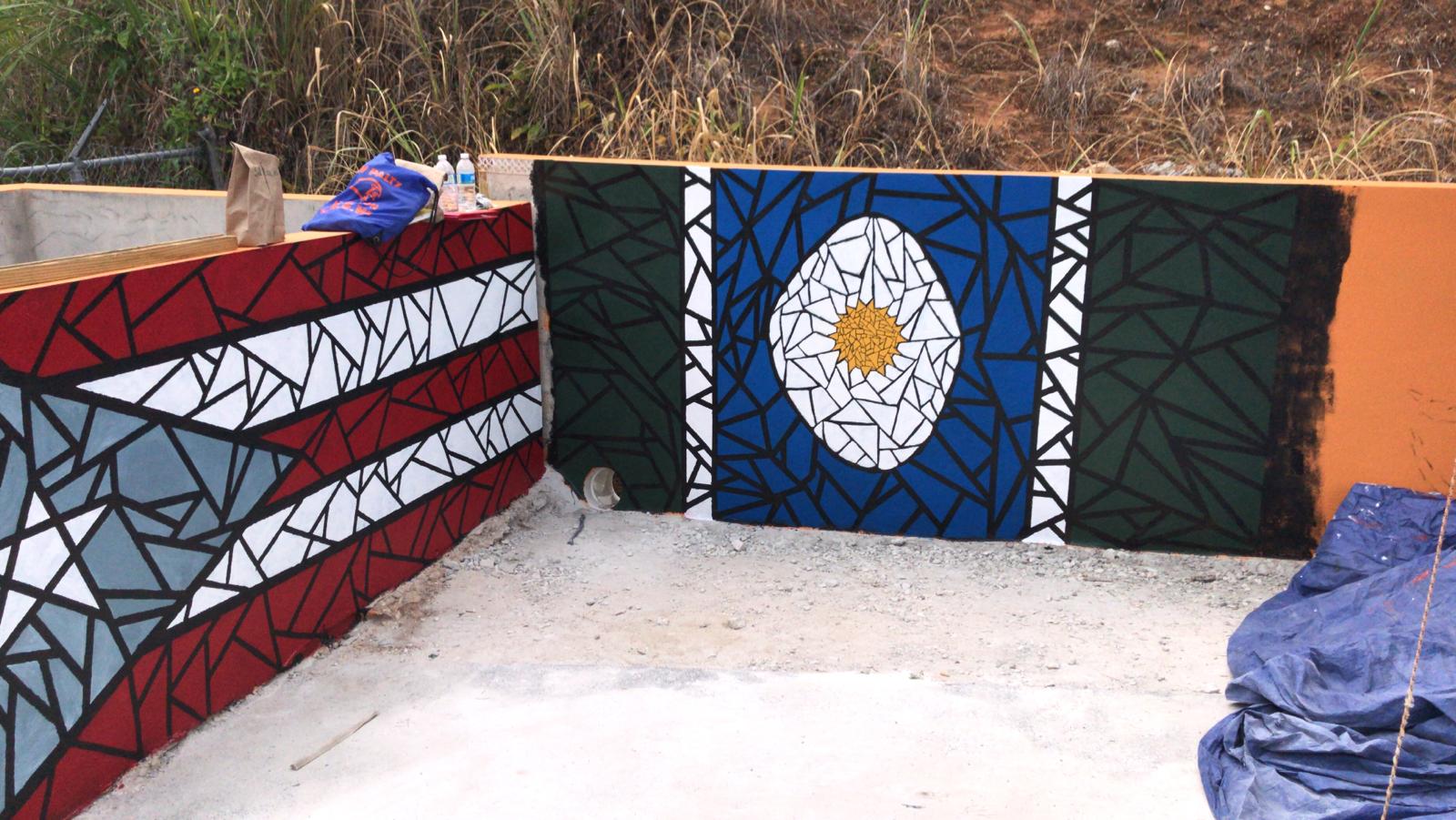 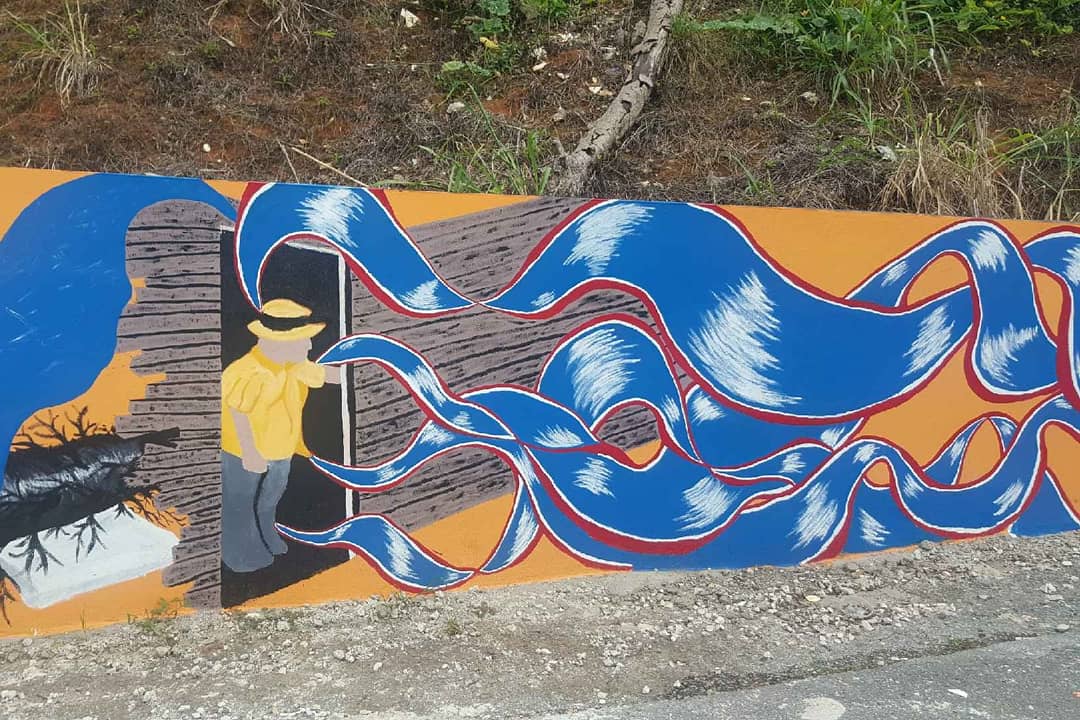 A big thank you again to Alyssa Dudinyak for her amazing work and selfless spirit, and to Heart 9/11 and the people of Orocovis, Puerto Rico for sending her back so she could finish her work. Your kind heart and skilled hand will be remembered in Orocovis forever!

You can find more of Alyssa Dudinyak's artwork on her Instagram page @dudinyak.art