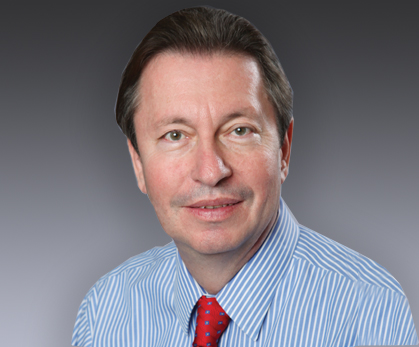 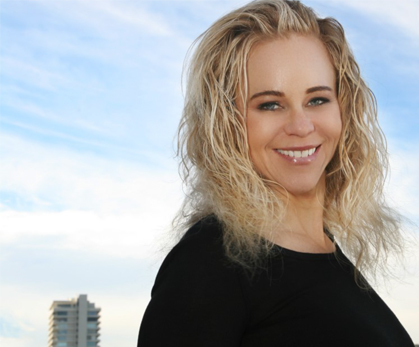 Solving complex legal and business issues relating to contracts and copyright law for longtime clients such as Steven Tyler of the band Aerosmith and newer artists such as deadmau5 is all in a day’s work for Dina LaPolt ’90 (Music).

LaPolt credits her participation in running the College’s Concert Committee, then called Jedi Productions, for helping to further develop her career interest in music.
“I produced numerous concerts while at New Paltz, including the 1989 show featuring Joan Jett & the Blackhearts,” said LaPolt. “The experience taught me to never compromise your passion or what you want to do with your life.”

Prior to becoming an attorney, LaPolt was a musician and served as talent buyer/concert promoter and a personal manager, all of which, she says, have allowed her to bring a unique insight to the practice of law.

“When I was a musician, I was very focused on being able to support myself with my music. I never chose another path even when others tried to convince me to have a plan B I could fall back on,” she said. “I never paid attention to anyone’s doubts and I threw all my eggs in one basket. I would have never gotten into music law if I hadn’t had the life experience of being a musician and an artist.”

In addition to practicing law, LaPolt serves as one of the attorney advisors to Songwriters of North America (“SONA”) and the GRAMMY Creators Alliance and is an activist for creators and celebrities in the areas of privacy, copyright and fairness in radio. She also teaches a class titled “Legal and Practical Aspects of the Music Business” at the UCLA Extension Program and served as the editor of Building Your Artist’s Brand as a Business, published by the International Association of Entertainment Lawyers in 2012. 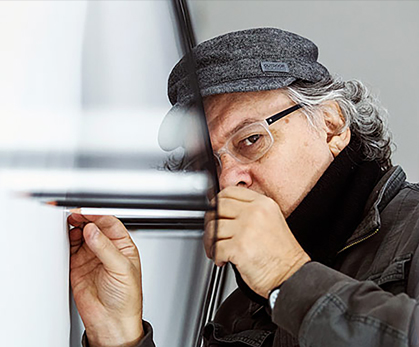 Maggi’s exhibition, Global Myopia II, came after the artist’s whirlwind springtime stay in Madrid, Spain, during which he installed a solo show in two Galeria Cayon spaces.
Inspired by technology, biology and symbolic alphabets, Maggi’s work deconstructs methods of communication. Revealing the artist’s awareness of the realities of
modern communication, the intricacies of Maggi’s work are meant to make the viewer slow down and reflect upon the exhibition’s painstaking detail and complexity.

“In a world obsessed by long distance and acceleration, the only goals of my exhibition are to promote pauses and approaches that make time visible,” said Maggi.

Maggi splits time between New Paltz and Montevideo, Uruguay. His artwork and approach are known best for his use of commonplace materials such as aluminum foil, apple skins, acid-free office paper, and convex mirrors as the basis for his creations. Maggi transforms these ordinary items into complex and often repetitive patterns that shape abstract landscapes and rich illustrations.

Maggi’s work has been exhibited extensively throughout the United States, Europe, and Latin America. He represented Uruguay in the 2002 São Paulo Bienal, and his works have been shown in institutions including El Museo del Barrio, Whitney Museum, New York Drawing Center, and MoMa. The artist’s exhibition “From Hugeuenot to Microwave: New and Recent Works by Marco Maggi” was featured at The Samuel Dorsky Museum of Art in 2011. He also has solo shows planned for Paris and New York City fall 2016. 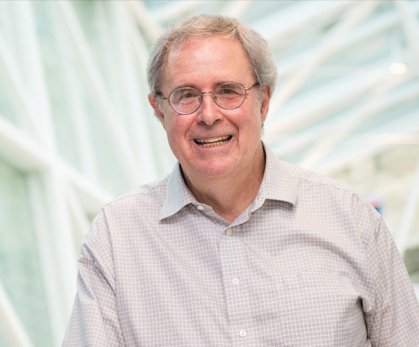 Research Consultant for The Benjamin Center

Tom Cetrino ’73 (Political Science) credits his SUNY New Paltz professors, particularly Gerald Benjamin and Alan Chartock, with inspiring him to pursue a career in public service. After New Paltz, he went on to receive his master’s degree in criminal justice from SUNY Albany and then embarked on a decades long career in research.

Previously, as research director for the New York State Public Employees Federation, Cetrino was the primary researcher and author of several reports that documented the cost-effectiveness of using state employees rather than consultants to handle most of New York State’s engineering and information technology work. His efforts helped lead to the enactment of the Contract Disclosure Law of 2001 which requires consultants hired by New York State to disclose their costs and the nature of
their work.

Cetrino also helped to establish the Cetrino Family/Rubin Benjamin Endowed Scholarship, a full-tuition scholarship and internship program for outstanding juniors who are interested in a career in public service. 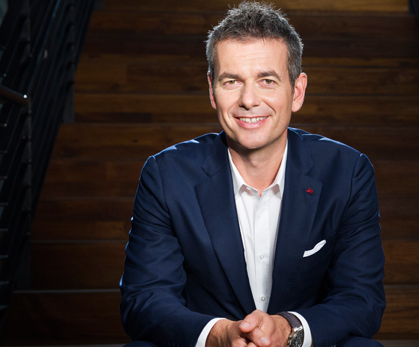 Robert Kyncl ’95 (International Relations) is the Chief Business Officer at YouTube where he oversees all business functions including content, sales, marketing, platforms, access, and strategy. Previously, Robert was Vice President of Content at Netflix, where he spearheaded the company’s content acquisition for streaming TV shows and movies over the internet.

In 2012, Robert was honored for his commitment to CoachArt, a local non-profit that provides arts and athletic lessons for children with chronic and life-threatening illnesses.

Robert holds a Masters of Business Administration from Pepperdine University and a B.S. in International Relations from SUNY New Paltz. He resides in Los Angeles with his wife, Ms. Luz Esther Avila ’96, and two daughters. 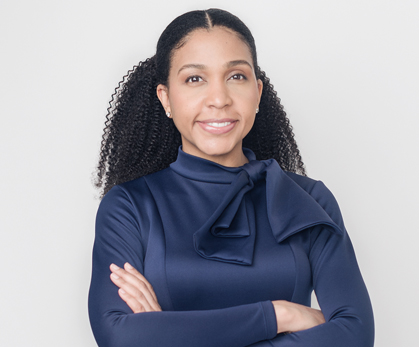 After graduating from New Paltz, Amber Greene ’03 (Public Relations) wasted no time putting her public relations degree to work. Now, 13 years into her career, she’s joined the latest incarnation of New York City government as policy director in the Office of Public Advocate.

Under public advocate Letitia “Tish” James (who is second in line to the mayor), Greene’s office exists as a watchdog to help the citizens of New York City “cut through the nonsense and red tape” when it comes to investigating “failures in service” on behalf of city government. These issues run the gamut from neglected public housing facilities to overcrowded schools and bring about critical public safety and criminal justice reforms.

Greene’s first job after New Paltz was in Newark, N.J., doing environmental remediation outreach and education for a brownfields project. She left that position to join the staff of the New York State Assembly as the public affairs coordinator for then-Assemblyman Richard Brodsky.

Greene then spent six years in city government working for the New York City Office of Emergency Management, as Director of the Ready New York Preparedness Campaign, where she initiated several disaster preparedness programs that are still functioning today.

After receiving a master’s degree in public policy from Princeton University’s Woodrow Wilson School of Public and International Affairs in 2012, Greene worked in Washington, D.C., as a communication consultant on educational policy, where she worked with clients (including the Gates Foundation and other large philanthropic entities) on how to improve public education opportunities worldwide. 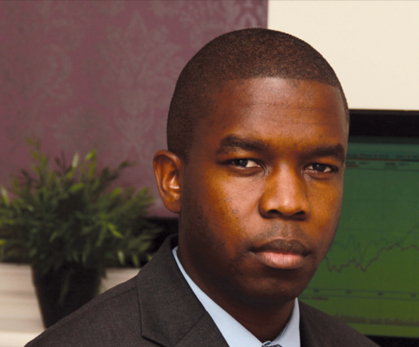 Valedictorian of his class, Fitzarnaz Drummond ’06 (Finance and Management) travels regularly from his London office to campus to speak with students.

Drummond is an executive director in liquidity at Goldman Sachs’ London office. He was previously a director in Treasury at Deutsche Bank, and prior to that he was a corporate treasury associate for Goldman Sachs. When speaking with students he defines success as having a combination of skills from passion to networking and encourages students to get involved beyond the classroom in order to be remembered.

“Seek every opportunity to become relevant, visible, and to raise your profile,” said Drummond. “Get out there, and get noticed.”

He leads by example. Drummond, who moved from Jamaica to the United States in 2001, served as a resident assistant and president of the Residence Hall Student Association (RHSA) and received the SUNY Chancellors Award for Student Excellence. He spent his final summer during college as an intern in New York City at Citigroup, the largest financial services company in the world.

Drummond joined the SUNY New Paltz Foundation Board on July 1, 2015 as a director and currently serves as the Foundation's first vice chair. 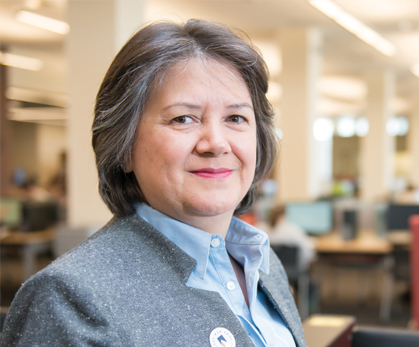 Jessica Faieta’85 (Economics) started her career with the United Nations Development Programme (UNDP) in 1991 as a UN volunteer in Guyana. In 1993, she became special assistant to the director for finance and administration. In 1997, she was appointed deputy resident representative (DRR) in Cuba and subsequently, DRR in Panama (1998–2001) and in Argentina (2001–2002).

From 2005 to 2006, Faieta served in the executive office of the UN Secretary-General Kofi Annan, as director of the office of the deputy secretary-general. She was also deputy chief of staff to the UNDP administrator and later became the UN resident coordinator and UNDP resident representative in El Salvador and Belize (2007–2010).

From 2010–2012, she was the senior country director in Haiti, leading the UN Development Programme’s (UNDP) recovery and reconstruction efforts after the January 2010 earthquake and in October of 2012, held the position of the UN deputy regional director for Latin America and the Caribbean.

In May 2014, she was appointed UN assistant secretary-general and UNDP regional director for Latin America and the Caribbean.

Faieta holds a Masters of Business Administration and a Masters in International Affairs from Columbia University. She is also a Yale University World Fellow. 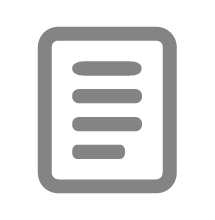 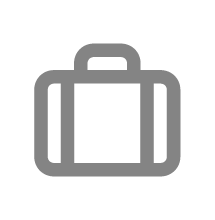 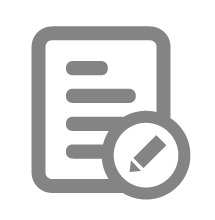 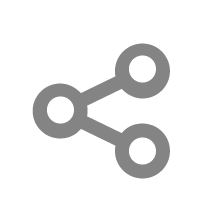